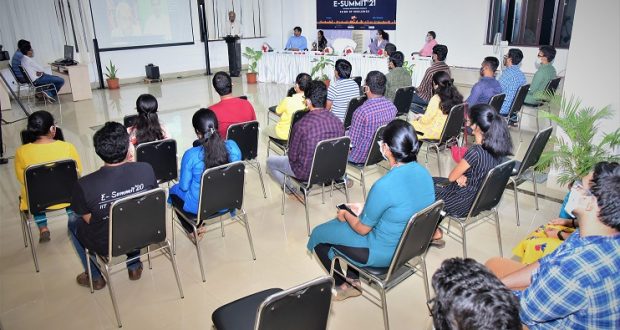 Speaking on the occasion, Prof. R.V. Raja Kumar, Director, IIT Bhubaneswar while welcoming the participants said that the outbreak of the pandemic posed several challenges in all fronts across the globe but has been responsible for the rising of innovative spirits and emergence of new technologies in the country. IIT Bhubaneswar has been successful in making several innovations, come up with mechanisms for conducting pen and paper exams online, etc., and applied the same very successfully carrying the performance evaluation of students. This apart this Institute could switch to online education without any gap, offered laboratory practice in a mixture of online and with the physical presence of students and could run timely academics at uncompromising standards during the pandemic. Following the same spirits, the students too could come up with organizing the pre-events of E-Summit, Wissenaire, and Alma Fiesta in hybrid mode. He explained about the establishment of Technology Incubator, Start-up Centre and Research Entrepreneurship Park in the year 2016. The Research Entrepreneurship Park of the Institute could also start a Centre of Excellence in Virtual and Augmented Reality, a unique Centre of its kind in the country.

He expressed his happiness that the four-day-long conclave will bring the best of entrepreneurial minds together that will, in turn, lead to fruitful outcomes benefiting the society at large.

The Chief Guest, Shri KrisGopalakrishnan, in his thought-provoking talk motivated the students to attain something fruitful and said that ordinary sustenance is not enough. He also added the need of a grand transformation, greater resilience to meet the unforeseen challenges. He mentioned about all those eminent personalities who brought tremendous changes in the course of evaluation are not smarter but great at their indomitable spirits. He wished IIT Bhubaneswar to impart innovativeness among the young minds and sustain its uniqueness throughout its existence.

2021-03-26
Editor in chief
Previous: 939 startups have been registered in Odisha in the last four years
Next: Prime Minister pays homage at the Mausoleum of Bangabandhu Sheikh Mujibur Rahman