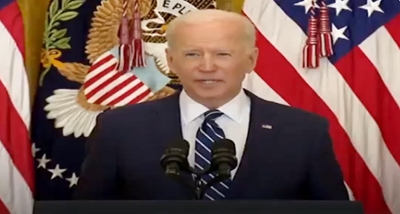 in International March 26, 2021 Comments Off on America & its allies to hold Beijing accountable on Taiwan, South China Sea and other issues: Joe Biden 311 Views

Washington:26/3/21: United States President Joe Biden disclosed he had made it clear to China that the US is not looking for confrontation, although there will be steep competition.

Biden said he had a two-hour conversation with Chinese president Xi Jinping after he assumed office and asserted that China must play by the international rules and honour fair competition. He repeated that he thinks that Xi does not have a democratic bone in his body and asserted that US and its allies will hold Beijing accountable on Taiwan, South China Sea and other issues.

Biden said that China’s overall goal is to become the leading country in the world, but asserted it won’t happen under his watch.

President Biden yesterday held his first press conference since assuming office and made an ambitious pledge of administering 200 million vaccine shots in 100 days. The US is the worst-hit country in the world from Covid-19, with the highest number of cases and deaths.

Biden said there will be responses to North Korea if they choose to escalate their nuclear programme. He said the US is consulting with its partner and allies on North Korea, saying that the country is the top foreign policy for him.

On Afghanistan, Biden said in terms of tactical reasons, it is hard to get US troops out and it is going to be hard to meet the May 1 deadline. He said, it is not the intention of the US to stay in Afghanistan for a long time but the question is how and under what circumstances to meet that agreement that was made by former President Trump.

2021-03-26
Editor in chief
Previous: Prime Minister Narendra Modi arrived in Bangladesh on a two-day visit
Next: BJD announced Rudra Pratap Maharathy as the party’s candidate for upcoming bypoll in Pipili