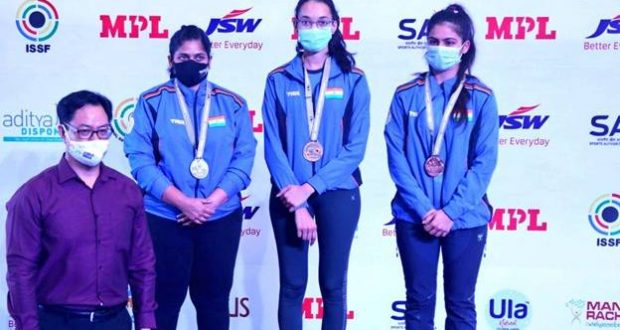 Earlier in the day, youngster AishwaryPratap Singh Tomar won the gold medal in the men’s 50m Rifle 3 Position event. With their performances today, India maintains their position at the top of the medal tally with 9 gold, 5 silver, and 5 bronze.

Shri Rijiju complimented the shooters for the performances at this World Cup, which is one of the first major global competitions to be held after the coronavirus lockdown, saying, “The overall performance in this World Cup has been phenomenal for India. We had great expectations from our shooters because we have extended all possible help throughout this pandemic period. Even during the pandemic, we ensured that the facilities and equipment are constantly provided to the shooters and all the sportspersons in India.”

The Sports Minister also spoke on the growth of shooting and how India has been performing consistently in a multitude of events in the last few years,  “It’s been a long journey for the Indian shooting team, just a few years ago, we were in contention for just a few of the events, suddenly India has become a dominant force. So it’s been an incredible journey. The kind of facilities that are coming up across the country, the kind of enthusiasm and interest that is being seen in the country among the players and the government’s efforts to supplement with all possible support, this is a combination of everything.”

Shri Rijiju has high expectations from Shooting at the Olympics and believes there are many medal contenders in the team, “I have great expectations from the shooting team, we are going to be sending the largest contingent to the Olympics. A few days ago we had people from athletics qualify and in the coming events, we will have more people qualify, so we have already surpassed the previous record of competitors sent for the Olympics. In Shooting, we will have the maximum number of athletes in medal contention and a very big team.”

2021-03-24
Editor in chief
Previous: Meeting under ‘Industry Care’ initiative held with North Odisha based industries
Next: EC Appeals to vote without fear in West Bengal