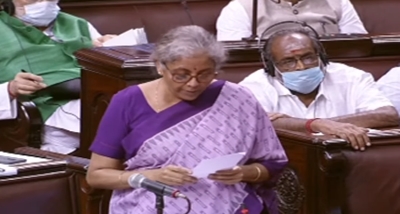 Newdelhi:24/3/21:Parliament has passed the Finance Bill, 2021 with the Rajya Sabha returning it to Lok Sabha today. With this, Parliament has completed all the budgetary exercise. Replying to a discussion on the Finance Bill, 2021, Finance Minister Nirmala Sitharaman said the NDA rule has provided corruption free governance and brought Indian economy out of policy paralysis and fragile five. She alleged that economy was mismanaged under UPA rule and Narendra Modi government had got legacy of high inflation which has been checked. Mrs Sitharaman also said NPA has brought down to around 8 lakh 99 thousand crore rupees by March 2020. Talking about GST, the Minister said GST compensation due to states prior to COVID has all been paid. She informed that 30 thousand crore rupees of GST compensation will be released to states this month.

Bill doesn’t envisage any increase in taxation particularly in direct taxes and income taxes. She also elaborated  several measures taken to provide relief to the common man during the COVI-19 pandemic. When the Finance Minister alleged that the West Bengal government has deprived  farmers of benefits under the central government’s PM Kisan Samman Nidhi scheme, the  House witnessed heated arguments between the treasury bench and TMC members.

Earlier, initiating the discussion, Dipendra Hooda of Congress alleged that Indian economy is in a bad shape due to wrong policy of NDA government. He said the policy adopted before COVID-19 has worsened the economic situation during the pandemic.

The Congress leader said, during COVID period the gap between the poor and the affluent has increased in the country. Mr. Hooda also attacked the government over rising prices of petrol and diesel and criticized the centre for turning a blind eye to the hardships faced by people due to price rise. The Congress leader questioned the centre over the issue of unemployment. Mr Hooda raised the issue of farmers’ protest and questioned the government’s claim of doubling farmers’ income by 2022.

Participating in the discussion, Sushil Modi of BJP complimented the government’s decision to not impose any new tax on the people in the budget.  Mr Modi also highlighted several measures taken in the Bill to ease the tax burden.  Talking about taxes on petrol and diesel, the BJP MP said it is not only the Centre which receives taxes but states also get the money collected from taxes on petroleum products. He added that bringing petrol and diesel under the GST ambit is not possible for the next 8 to 10 years. He also lauded Prime Minister Narendra Modi’s leadership in tackling the Covid-19 pandemic. Another party MP Jyotiraditya Scindia also expressed his views. Defending the government’s move related to disinvestment in PSUs, he questioned the Congress criticism in this regard and said  this process was started during the previous UPA rule.

Vijaya Sai Reddy of YSR Congress demanded tax exemption for senior citizens saying in the current budget, they have only been exempted from compliance burden.  He also questioned disinvestment in PSUs.  TKS Elangovan of DMK criticized the government over the state of unemployment in the country. Prof Ramgopal Yadav of Samajwadi  Party said the government has not made any provision in the current tax system to ease the hardship being faced by common man due to COVID 19. Dola Sen of TMC, Amar Patnaik of BJD and others also spoke on the bill.

2021-03-24
Editor in chief
Previous: EC Appeals to vote without fear in West Bengal
Next: Night curfew will be imposed in Odisha’s Nabarangpur district from March 25