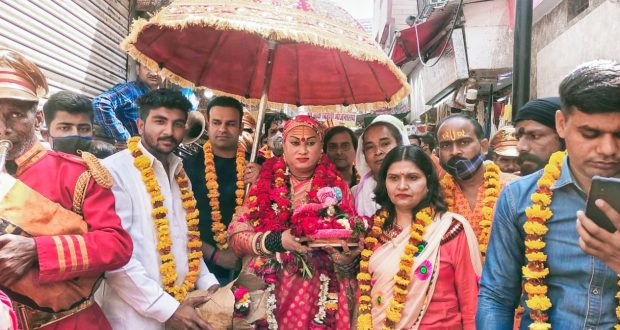 in National March 16, 2021 Comments Off on Mumbai based transgender Hemangi Sakhi Maa becomes a centre of attraction in Vrindavan Kumbh Mela 384 Views

Mumbai/Vrindavan: 16/3/21:The Mumbai-based transgender Hemangi Sakhi Maa participated first time in the “Vrindavan Kumbh Mela” and took a dip (Shahi Snan) in the holy Yamuna River. She has become the center of attraction to all. She participated in the pre- Vaishnav Kumbh Mela meetings, recited bhajan and kirtan, and delivered a motivational discourse. She has also been giving a “darshan” to devotees.

Thousands of saints and Mahamandaleshwars have set up their camps in Kumbh mela and the pilgrims and devotees from the world over have reached Prayagraj to seek blessings of Mahamandaleshwar. The mela will be on till March 25, 2021.

Mumbai’s well-known preacher and reader of Bhagwatkatha, transgender Mahamandaleshwar Hemangi Sakhi Maa says about Vrindavan Kumbh Mela “My learning and initiation took place in Vrindavan. I studied scriptures her. One gets a good experience with Brijwasis here. I have surrendered my body, heart, and wealth to Lord Krishna. Due to Lord’s blessings, I have reached up to here. He has transformed my life.

Hemangi Sakhi was born in Baroda in Gujarat. Then her family shifted to Mumbai since her father was a film distributor and was working for Raj Kapoor. She studied in a convent school for a brief period but left the school after the demise of her parents. After that, she performed the marriage of her sister. To support herself she acted in the films like “Shabanam Mausi”, “Down Town” and “Third Man”. She also appeared in “X Yor X” show on V channel and the show “Zindagi Life Show” on IBN 7 channel.

After that, she was inclined towards Lord Krishna’s worship and eventually gave up everything and reached Vrindavan. She studied scriptures and achieved initiation from Guru and reached up to this stage. Now Mahamandaleshwar Hemangi Sakhi Maa is known as world’s 1st Transgender Bhagvat Katha wachak.

2021-03-16
Editor in chief
Previous: ‘Kalira Atita’ Out Of The Race from Oscars 2021
Next: Odisha Issues Fresh Guidelines due to New COVID Strain