Top Headlines
Home » National » In Assam and West Bengal, Friday is last date for withdrawal of candidature for first phase of Assembly elections 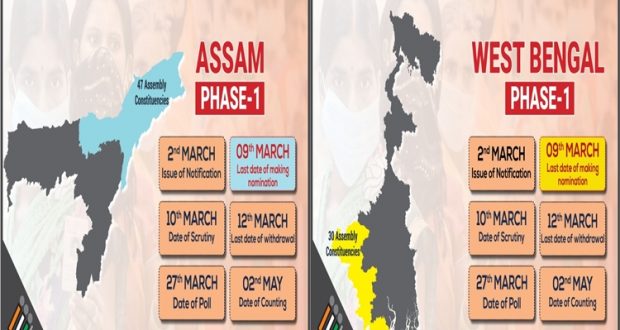 In Assam and West Bengal, Friday is last date for withdrawal of candidature for first phase of Assembly elections

in National March 12, 2021 Comments Off on In Assam and West Bengal, Friday is last date for withdrawal of candidature for first phase of Assembly elections 252 Views

Newdelhi:12/3/21:In the poll-bound states of Assam and West Bengal, tomorrow will be the last date for the withdrawal of candidature for the first phase of state assembly elections.

In the case of the second phase, tomorrow will be the closing day for filing the nominations. In addition, the process of filing of nominations will begin with the issuance of notification for the third phase of assembly elections in these two states and also for the single-phase elections in Kerala and Tamil Nadu as well as the Union Territory of Puducherry tomorrow.

The single phase polling in Kerala, Tamil Nadu along with the Union Territory of Puducherry will also be held on the same day.