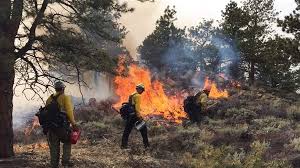 Earlier during the day, the Odisha government had formed a task force under the chairmanship of former Principal Chief Conservator of Forests  (PCCF) Sandip Tripathy to channelise the on-going action for containment of the massive forest fire in Similipal and other major forests in the State.

“The forest fire in Similipal is now almost contained. The core area with precious wildlife has not been impacted much. The flames are mostly confined to the peripheral areas of the tiger reserve project. Animals in core area are safe,” said Tripathy.

According to reports as many as 18 places in northern parts of the Similipal are still on fire. The fire continues to spread to four forests under Gurugudia and three forests in Barehipani range.

The Similipal biosphere reserve which is home to Royal Bengal tigers supports 94 species of orchids and about 3,000 species of plants.