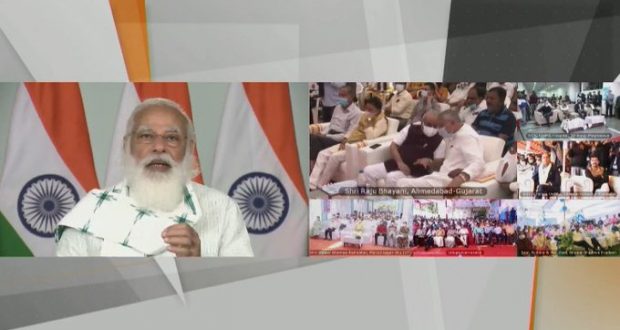 New Delhi; 7/3/21 Prime Minister Narendra Modi today called upon the people to use medicines from JanAushadhi Kendra saying that people have saved more than 9,000 crore rupees through these Kendras.

Speaking at the ‘Janaushadhi Diwas’ celebrations via video conferencing, Mr Modi said the Pradhan Mantri Bharatiya Janaushadhi scheme has relieved the poor of their high medical expenses. Jan Aushadhi centres are helping people from poor and middle-class families to save around 3,600 crore rupees every year.

He said Jan Aushadhi Suvidha Sanitary Pads are sold at just one rupee per pad. He was happy to note that that the JanAushadhi scheme is helping people not only in medical treatment but also in generating employment for the youth. He pointed out that more than 1,000 JanAushadhi Kendras are being run by women.

Mr Modi also dedicated the 7500th Janaushadhi Kendra at NEIGRIHMS, Shillong to the nation. He said there were less than 100 JanAushadhi Kendras till 2014. He said government is focused on opening 10,000 centres very soon.

2023 has been announced as the International Year of Millets by the United Nations. Prime Minister said production of millets will increase in India benefiting the small farmers.

He further said that India gave global recognition to Yoga and countries from across the world are demanding Indian crops and Indian iron. He said India is not only helping itself but also the world in terms of COVID vaccination.

Irshad from Diu who started his generic medical store recounted how his income has grown thrice since he started his Jan Aushadhi business.

On the occasion, awards were given to stakeholders in recognition of their excellent work.