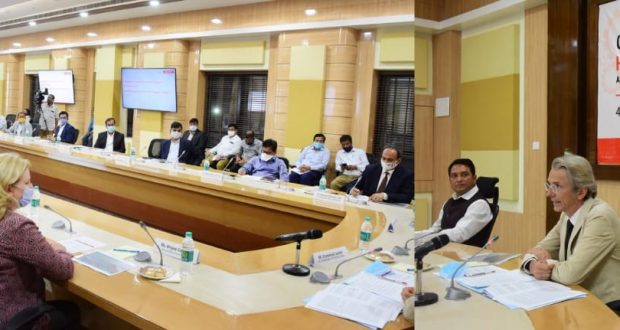 in Business, State News March 5, 2021 Comments Off on Emmanuel Lenain, Ambassador of France to India held discussion on investment opportunity in Odisha 435 Views

BHUBANESWAR:5/3/21:  A French delegation led by Emmanuel Lenain, Ambassador of France to India, on Thursday held discussion with Odisha government officials on bilateral trade, economic cooperation and investment opportunity in the State.

On a four-day visit to Odisha, the delegation will explore the possibility to enhance ties between French and Odisha universities, especially in the field of sports, and boost French investments in smart city and renewable energy projects in the State.

In his first official visit to the State, the France Ambassador interacted with Minister of State for Industries and MSME Dibya Shankar Mishra. Stating the State has already demonstrated its capacity for holding international level sports at short notice, Mishra sought cooperation from the French delegation to boost sports infrastructure.

Representatives from French companies that are active in Odisha (EDF, Egis, Bureau Veritas, Schneider Electric) were part of the delegation. France, through Agence Française de Développement (AFD), is actively supporting the ‘B-Active’ project of Bhubaneshwar’s Smart City programme. The French delegation will also explore opportunities in the sustainable fisheries sector.

Lenain is scheduled to launch the first Indo-French dual degree course in Sports Management between Xavier University and French Business School Emlyon at XIMB here in the presence of Sports and Youth Services Minister Tusharkanti Behera.,

Meet on CITIIS projects
Country Director of AFD India Bruno Bosle on Thursday held talks with senior officials of BDA, BMC, and Bhubaneswar Smart City Ltd (BSCL) to get an overview of the City Investments to Innovate, Integrate and Sustain (CITIIS) projects.

Economic Counsellor of Energy and Industry division in the Regional Economic Services of French Embassy Thomas Salez and representatives from the CITIIS Project Monitoring Unit were present. The delegation also made site visits to CITIIS project locations, including heritage sites like Debi Padahara and Ganga Jamuna tanks. Ministry of Housing and Urban Affairs, AFD, European Union (EU), National Institute of Urban Affairs, and BSCL are jointly implementing the CITIIS programme in the city.