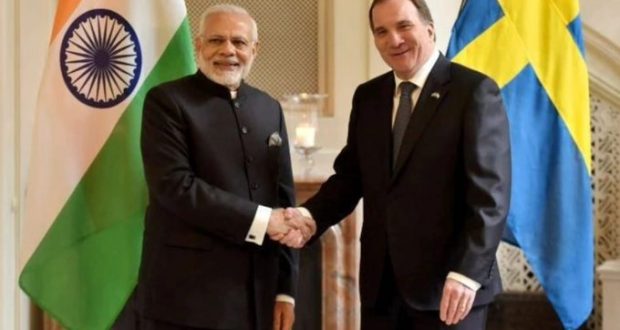 This will be the fifth interaction between the two leaders since 2015. Prime Minister Shri Narendra Modi had visited Stockholm in April, 2018 for the First India Nordic Summit. Prime Minister H.E. Stefan Löfven had visited India in February, 2016 for the special Make in India week. Earlier, the two leaders had met on the sidelines of the UN General Assembly in September, 2015. In April, 2020, the two Prime Ministers had a telephonic conversation to discuss the situation arising out of the Covid-19 pandemic. In addition, Their Majesties Carl XVI Gustaf and Queen Silvia of Sweden had visited India in December, 2019.

India and Sweden have warm and friendly relations based on shared values of democracy, freedom, pluralism and rules-based international order. Both countries have very close cooperation in the areas of trade and investment, innovation, science & technology as well as research and development. Around 250 Swedish companies are actively operating in India in various sectors such as health & life sciences, auto industry, clean technology, defence, heavy machinery & equipment. Around 75 Indian companies are also active in Sweden.

During the Summit, the two leaders will hold comprehensive discussions on the entire spectrum of the bilateral relations and exchange views on regional and global issues including further strengthening of cooperation in the post COVID era.