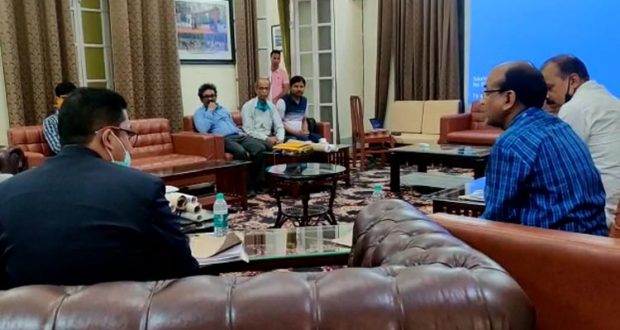 in State News February 25, 2021 Comments Off on West Bengal Officials Meet To Resolve Border Issues near Jaleswar and Bhograi 282 Views

Bhubaneswar:25/2/21: In a bid to discuss modalities in resolving disputes arising out of several bordering villages near Jaleswar and Bhograi in Balasore district, a meeting of top officials of Odisha and West Bengal governments is underway at West Medinipur on Thursday.

The development has come as a relief for both the neighbouring states following a prolonged dispute over demarcation of border. It’s an identity crisis of sorts for thousands of villagers from as many as 82 villages, who are affected by the continuing territorial dispute.

Notably the Subarnarekha river is the natural border between both the states. However, there is no physical demarcation and the virtual lining often creates confusion. West Bengal extracts sand from the riverbed. However, it is being said that the sand mining zones fall within Odisha’s jurisdictional boundaries which is the root cause of tension between locals from both the sides.According to reports, in order to maintain peace and tranquility in the adjoining areas and resolve the issue, higher authorities from both states are deliberating to find ways and means.

“Earlier National Green Tribunal (NGT) had intervened in the row and directed both the stakeholders to resolve the standoff with mutual deliberation between representatives of both the states,” said Balasore ADM Sambit Kumar Nayak.

“After discussions in this regard, we have made an aerial survey of the area and used geo-referencing technologies to demarcate lines. In the process, Odisha and West Bengal have marked 36 and 52 reference points from each of the sides. Hopefully, both sides will agree with the development in the meeting and the dispute will be over soon,” said Nayak.

2021-02-25
Editor in chief
Previous: Two symptomatic travellers who arrived at the Biju Patnaik International Airport have tested positive
Next: A major fire broke out in a farmhouse near a petrol pump under the Sadar police limits in Cuttack