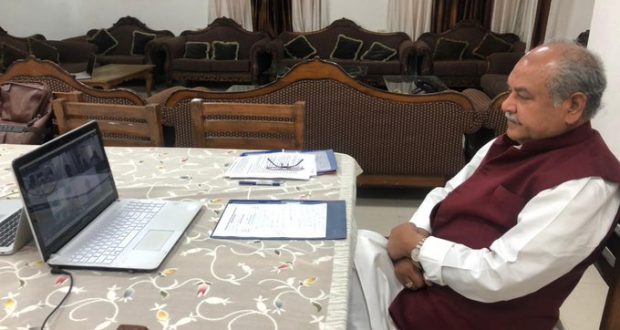 Newdelhi:23/2/21:22ndMeeting of the Central Employment Guarantee Council, constituted under Section 10 of the Mahatma Gandhi National Rural Employment Guarantee Act (Mahatma Gandhi NREGA), 2005 was held on 23.02.2021 under the Chairmanship of Union Minister of Rural Development, Agriculture and Farmers’ Welfare, Panchayati Raj and Food Processing Industries through Video-Conferencing.

Union Minister of Rural Development, Agriculture and Farmers’ Welfare,Panchayati Raj and Food Processing Industries, Shri Narendra Singh Tomar stated that Mahatma Gandhi NREGA is one of the largest employment generating schemes which provides alternative employment to the people in rural areas.  In this current financial year 2020-21 under the shadow of COVID-19 pandemic, Mahatma Gandhi NREGS has played its critical role in  providing wage employment to the wage seekers. A total of 344 crore persondays employment has been generated so far, which is the highest ever persondays generated so farand around 44% higher than that of last year during the same period. 1.69 crore new job cards were issued this year as compared to usual about 69 lacs in previous years reflecting the succor it provided to the migrant workers going back to their villages. This has also resulted in creation of around 72 lakhs durable and useful assets.  A total of 4.29 crore assets has been geotagged with the based coordinated efforts of States Government and Central Government. Out of total persondays generated, about 52% women persondays has been generated in the current financial year which reflects significant participation of women in the programme. The Government has accorded priority on creation of individual assets and assets on water conservation/irrigation which would help agriculture sector.

Minister also informed that with a view to achieving transparency and accountability, the Government has been taking all steps to achieve 100% payment of wages in the bank account of Mahatma Gandhi NREGA workers and accordingly emphasise on social audit of works.  For the Financial Year 2020-21, Rs. 1,11,500 crore has been allocated which is an all-time high. A sum of about Rs.93,000 core has already been released to the States/UTs.The determination of government to arrange for additional funds for the programme in case of need was also reiterated.

During the COVID-19 pandemic, the GRS of Mahatma Gandhi NREGS, Panchayat Secretary, Asha workers, Anganwadi Sahayika and SHGs has played a commendable role in the rural areas.He congratulated them.

Emphasis was also laid on higher level of  convergence among the programmes of Government and different resources flowing to the villages. He advised the GPs to address through GPDP 5 major problems and saw no reason why we couldn’t get rid of them in next 5 years. He also advised the State Governments to route all funds flowing to rural areas through GPDP.

Minister of State for Rural Development, Sadhvi Niranjan Jyoti, highlighted the good works done under Mahatma Gandhi NREGA by providing employment to rural people during these difficult days in the COVID-19 pandemic.  She stressed on moreactivities related to Swatch Bharat, so that rural area should have clean and green environment.

Secretary, Rural development, GoI emphasized on GIS based planning, strengthening of Social Audit, recruitment of Ombudsman, geotagging of assets and monitoring of works. He also highlighted to go for GIS based planning on a saturation mode.

During the Meeting, all participating members gave their valuable suggestions for improving the Scheme. Union Minister assured to consider all the suggestions under the ambit of the Act.

2021-02-23
Editor in chief
Previous: Odisha Chief Minister announced projects worth Rs 68 crore for Pipili and Delanga
Next: Important to ensure that no parallel tracks for climate negotiations are created brushing aside the fundamentally agreed principles: India at UNSC