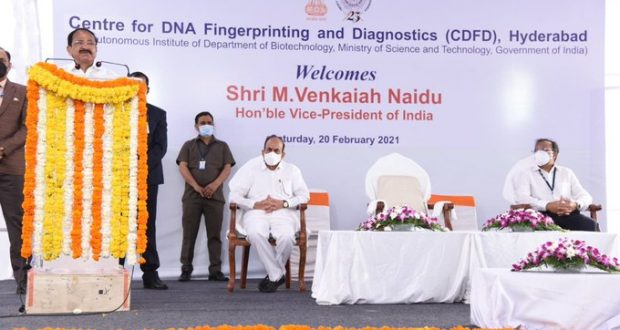 in National February 20, 2021 Comments Off on Vice President points to the cascading effect of genetic disorders on the economy 256 Views

Hyderabad:20/2/21:The Vice President, Shri M Venkaiah Naidu today called upon the people, particularly the youth, to adopt healthy lifestyle and avoid sedentary living and junk food in view of the growing incidence of non-communicable diseases in the country.

Addressing the scientists of Centre for DNA Fingerprinting and Diagnostics after visiting its facilities in Hyderabad, he said that a few years ago, WHO data has attributed 61 per cent of all deaths in India to NCDs like heart disorders, cancer and diabetes.

Shri Naidu called for arresting this trend by mounting a massive national campaign on the importance of adopting healthy lifestyle and food habits.  In this context, he urged the scientists to create awareness among the people on making healthy choices.

Calling for collective efforts to promote awareness among the people, particularly school and college students, on the negative impact of sedentary lifestyles and unhealthy dietary habits, the Vice President stressed the need to promote organic farming, revisit our traditional food habits and promote the consumption of protein-rich food for better health outcomes. Cautioning against the fad for instant food, he quipped “instant food means constant disease”.

Referring to the burden of genetic diseases, the Vice President asked the scientists to develop simpler and cost-effective methods for diagnosis of various genetic diseases to help in better patient management.  He lauded CDFD for identifying novel genetic mutations for more than 10 disorders in India, including the identification of 4 new genes, which would be helpful in genetic counseling and management of diseases.

Referring to the increased incidence of non-communicable diseases in India, he said that rare genetic disorders form a major group of NCDs.

Observing that an estimated 350 million people were suffering from “Rare diseases” worldwide and about 70 million (1 in 20) in India, Shri Naidu pointed to the cascading effect of the burden of these disorders on the economy and social structure of the society since most of them are untreatable.

Appreciating the Department of Biotechnology (DBT) for promoting genome-based public health research and for asking CDFD to take-up a major research program on “Pediatric Rare Genetic Disorders”, he said the programme would contribute positively towards the Government of India’s Sustainable Development Goals regarding human health and mitigate the societal burden of genetic diseases.

Noting that CDFD has provided services for genetic testing and counseling of patients with genetic diseases to more than 60,000 families since its inception, Shri Naidu lauded the institution for establishing nationwide collaborations with several clinical centres for evaluation of patients with unexplained genetic disorders. He asked CDFD to create awareness among the people through media on the services it was offering on genetic diseases.

Referring to the unprecedented challenges faced by humankind in the wake of COVID-19 pandemic, he commended CDFD’s Corona Warriors for providing accurate diagnosis of COVID-19 infection. “I am told that CDFD has undertaken the testing of more than 40,000 samples in the past 10 months”, he said.

Appreciating CDFD’s contribution towards understanding the mutation spectrum of Corona virus in the Indian population, he said “such efforts go a long way in ensuring our readiness to tackle any variants of the virus”.

Pointing out the problem of increased crime rate in the world, he lauded CDFD for providing state of the art DNA fingerprinting service to courts, National Investigating Agency (NIA) and CBI for ensuring correct judgment in criminal cases, and in providing relief to the families of disaster victims.

Lauding the contributions made by the CDFD scientists and scholars, Shri Naidu urged them to ensure that the outcomes of the research benefit the common man and improve the quality of their lives. “The ultimate aim of science must be to make people’s lives happier”, he added.

2021-02-20
Editor in chief
Previous: Jal Jeevan Mission: Special Campaign to provide potable piped water supply in Schools & Anganwadi Centres
Next: Odisha’s growth rate will be at -4.92% in 2020-21, which is better than India’s growth at-7.7% during the period