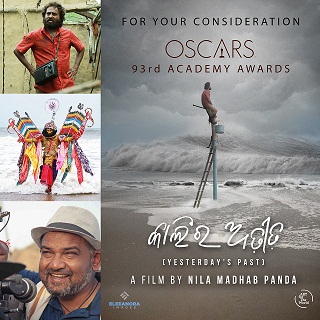 Bhubaneswar:20/2/21:Nila Madhab Panda’s Odia film Kalira Atita has entered the Oscars 2021 race under multiple categories. The director of the film took to Twitter to convey the news to the fans and expressed his happiness. He said that the film is in the race in the general entry category 4 and is being made available for academy screening.

The film has joined the Oscars under the categories – Best Actor, Best Director, and a few other categories. This is indeed a huge achievement for the team.

Nila Madhab Panda shared a poster and wrote, “In a year full of challenges, feel extremely happy to announce #KaliraAtita has made its entry into the Oscar race in general entry category 4 best picture, Best Actor, Best Director & many other categories. It’s being made available for academy screening, Grateful to everyone (sic).”

Kalira Atita revolves around the story of a disillusioned young man, who has already survived a cyclone and is yet to experience another one. It is about human fears, the uncertainty of life, and human triumph over everything. The film also talks about climatic change and the effects it in the future.

The film was earlier screened in the International Film Festival of India 2020 last month and garnered huge appreciation. Popular actor Pitobash Tripathy plays the protagonist in the film.

Nila Madhab Panda founded the International Screenwriters Lab (2008) in India to create quality scripts for family and children audiences of Asian Cinema. His documentary, God’s Own People (2016), narrated by Amitabh Bachchan, is based on the reincarnation of Lord Jagannath, exploring the culture around it and the faith of the people. He has also documented the sixty-two tribes of Odisha over years.

2021-02-20
Editor in chief
Previous: Justice Uday Umesh Lalit grace Foundation Ceremony Of Indian Institute Of Law
Next: Emphasis is being given to enhance manufacturing capacity in defence sector: Narendra Modi