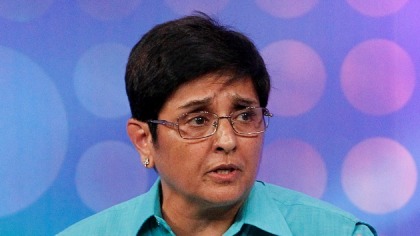 Kiran Bedi has been removed as the Lieutenant Governor of Puducherry

in National February 16, 2021 Comments Off on Kiran Bedi has been removed as the Lieutenant Governor of Puducherry 280 Views

New Delhi:16/2/21: Kiran Bedi has been removed as the Lieutenant Governor of Puducherry, a Rashtrapati Bhavan communique said on Tuesday.

Earlier in the day, the Congress government in the union territory lost its majority with another ruling party legislator resigning on Tuesday, reducing the numbers of the party-led alliance to 14 in the assembly with an effective strength of 28.

Seizing on the opportunity, the opposition which also has 14 MLAs in the 33-member house, demanded the resignation of Chief Minister V Narayanasamy, saying his government was in minority.

However, Narayanasamy rejected the demand, claiming that his government continued to enjoy ‘majority’ in the assembly, which is set to go for polls in the next few months.

Congress MLA A John Kumar resigned from his MLA post and the party on Tuesday, becoming the fourth legislator to quit the assembly since last month, dealing a blow ahead of the elections.

With Kumar’s resignation, the strength of the Congress in the assembly has decreased to ten including Speaker. Its ally DMK has three members and an independent also supports the government.

The simple majority in the assembly with the reduced strength is 15. Polls are likely in April and the House’s term ends on June 8, 2021.

The development came a day ahead of Congress leader Rahul Gandhi’s visit to the union territory to launch the party’s campaign.

The party position in the assembly as of Tuesday: Congress (ten), DMK three, All-India NR Congress seven, AIADMK four, BJP three (all nominated and have voting rights) and one independent.

Four Congress MLAs have resigned while one member had been disqualified.

2021-02-16
Editor in chief
Previous: Shree Jagannatha Temple received a record quantity of gold jewellery as a donation from a devotee
Next: India Trounce England By 317 Runs