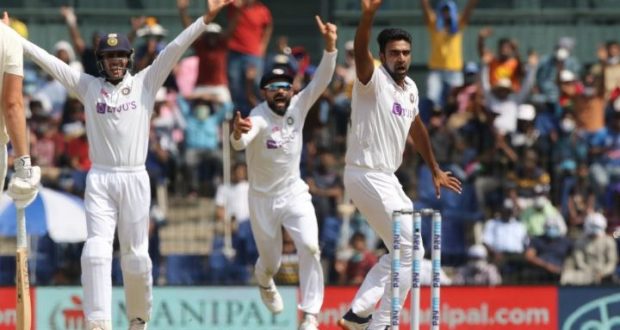 Chennai:16/2/21: India has outplayed England completely in the second Test here. They have leveled the four-match series 1-1 after beating England by 317 runs. Axar Patel took a five-wicket haul in the second innings.

Local boy Ravichandran Ashwin starred in the match and scored 119 (including a century) runs and took 8 wickets (including a five-wicket haul) in the match. Hailing the thumping win, Team India skipper Virat Kohli tweeted, “Superb character and fighting spirit on display. Well done boys. The focus is now on the next one.”

India needed 7 wickets on Tuesday to register a win after losing the first match by a massive 227-run margin. Batting on a spinner-friendly wicket for 2 days and scoring 429 runs was always going to be an uphill task for the visitors as Ravichandran Ashwin and Axar Patel made sure that no noticeable partnership blossoms in the middle.

Daniel Lawerence (26) was the first to depart after a brilliant stumping from Rishabh Pant on the bowling of Ashwin, who also broke through Ben Stokes’ (8 off 51) resistance. Virat Kohli leaped forward to take a stunning catch at second slip as the star all-rounder fell to Ashwin for the 10th time in Test career.

After blows from the local boy, left-arm spinner Axar Patel ensured that the floodgates remain open. The debutant removed a sweeping Ollie Pope Ben Foakes for 12 before Kuldeep Yadav joined the party. The chinaman bowler would have got the big fish Joe Root if not for that dropped catch from Mohammed Siraj, nonetheless Axar Patel took a catch at short mid-wicket and helped the youngster dismiss wicketkeeper-batsman Ben Foakes. The wicket was Kuldeep Yadav’s first in the format since January 2019.

When the teams walked off for lunch England’s scorecard read 117 for 7.

Joe Root (33 off 92) fell on the 5th ball after the break after a ball kissed his gloves and landed in the safe hands of Ajinkya Rahane at slip. The next over from the Gujarat-born saw his become the 9th Indian to register a five-wicket haul on debut as Olly Stone got castled for a duck.

With not much left in the game for England, Moeen Ali decided to send a message to the IPL franchises ahead of the IPL 2021 auction. He blasted 3 consecutive sixes off Axar Patel and played at a strike rate in access of 200 to enteratain the Chepauk crowd.

2021-02-16
Editor in chief
Previous: Kiran Bedi has been removed as the Lieutenant Governor of Puducherry
Next: Odisha chief minister announced that the annual grant of the Western Odisha Development Council will be doubled