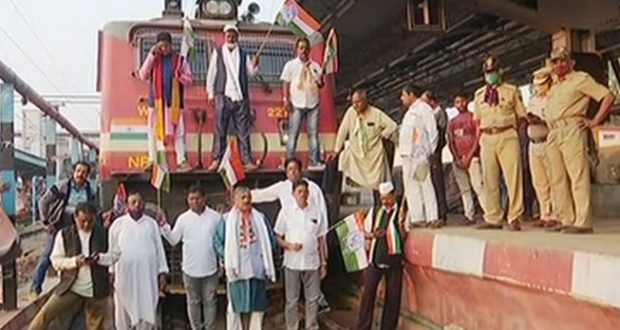 in State News February 15, 2021 Comments Off on Odisha bandh being observed by the State Congress has Cripples Normal Life 246 Views

Bhubaneswar:15/2/21:Vehicular traffic has been disrupted in many parts of the State especially in the Capital city due to the six-hour Odisha bandh being observed by the State Congress in protest against the stiff rise in prices of fuel and other essential commodities in the country.

As per the announcement, the party workers and leaders in Bhubaneswar resorted to rail roko at Bhubaneswar station. Several party workers led by MLA Sura Routray staged the rail-roko on the track, raising slogan and waiving party flags. Passengers as well as goods trains are stranded due to the blockade.

Public transportation on road has come to a grinding halt in Bhubaneswar as the party workers blocked the national highway near Satsang Vihar. The NH-16 is jammed as hundreds of buses and heavy vehicles including trucks, lorries are lined up on the road. Passengers coming from far off places have faced difficulties to reach their destination.

A Congress protester said “We are ensuring smooth passage of emergency vehicles including an ambulance, milk van, fire fighting vehicles and marriage party vehicles. We request people to cooperate with us for a larger public interest.”

“During the UPA regime, the prices of petrol and diesel were below Rs 70, but now it has reached almost Rs 100 even as the prices of crude oil have come down in the international market. We are protesting the lackadaisical approach of the Centre as well as the State Governments towards the basic cause of people,” another party worker said.

In Cuttack, busy Badambadi bus stand wore a deserted look as the buses have stayed off the road due to the shutdown. Passengers have been stranded with no alternative to travel to their respective destination.

Odisha Pradesh Congress Committee (OPCC) president Niranjan Patnaik said “Both the Centre and the State government are imposing unreasonable taxes on fuel, leading to a steep hike in their prices which in turn lead to an increase in the prices of other essential commodities. Odisha should reduce tax on petrol and diesel in order to give some relief to the people who are already sustaining hardship due to the pandemic.”

2021-02-15
Editor in chief
Previous: Fire broke out at Botanical Garden inside Nandankanan Zoological Park
Next: Servitor of Lord Jagannath Temple here has been detained by Police for allegedly attacking fellow sevayat