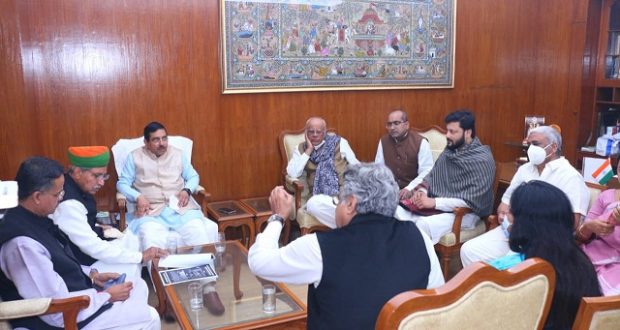 in State News February 13, 2021 Comments Off on Odisha MPs Urge Union Minister for withdrawal of the draft bylaws framed by the NMA for temples in Ekamra Kshetra 287 Views

New Delhi: 13/2/21:A delegation of the BJD MPs met Union Minister of Parliamentary Affairs, Coal and Mines Pralhad Joshi on Saturday. The delegation demanded immediate withdrawal of the draft bylaws framed by the National Monuments Authority (NMA) for Ananta Basudev and Brahmeswar temples in Ekamra Kshetra.

The delegation led by Pinaki Mishra submitted a memorandum to Joshi after an hour-long meeting.

A day earlier on Friday, Chief Minister Naveen Patnaik had requested all MPs from Odisha to take up the issue with the Centre.

The NMA in its draft heritage bylaws for Jagannath temple, Ananta Basudeva and Brahmeswar temples, has defined various zones for their conservation and periphery development.

The draft bylaws for Ananta Basudev covers a section of the Lingaraj temple in its regulated zone and those for Brahmeswar have Bhaskareswar and Megheswar temples within 300-metre radius.

On Tuesday, Union Culture Minister Prahlad Singh Patel said that only draft heritage bylaws for Sri Jagannath temple in Puri have been withdrawn while it continues to remain in force for Ananta Basudev and Brahmeswar temples in Ekamra Kshetra of Bhubaneswar.

The Odisha government had cleared structures on 75-metre radius of the temple to develop a heritage corridor under the Ekamra Khestra project. The draft heritage bylaws have dealt a blow to this effort, which has hit a roadblock following the objection by the Archaeological Survey of India (ASI) on the use of JCB for digging the heritage site.

Demanding the withdrawal of the bylaws within 24 hours, the servitors of Lingaraj temple and several devotees had staged a mass protest on Friday near the temple by lighting the diyas.

2021-02-13
Editor in chief
Previous: Centre has ordered the removal of encroachments from the monuments and sites protected by ASI
Next: FASTag declared mandatory from midnight tomorrow