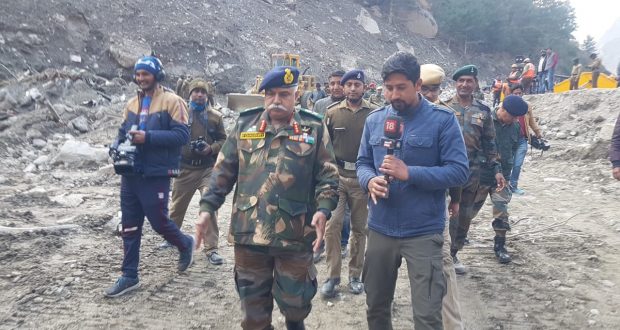 DGBRO Visits Joshimath to take Stock of Damages Due to GLOF

in National February 13, 2021 Comments Off on DGBRO Visits Joshimath to take Stock of Damages Due to GLOF 268 Views

New Delhi;13/2/21:Lt Gen Rajeev Chaudhry, DG Border Roads visited Joshimath sector today to take stock of the ongoing rescue, relief and rehabilitation work being carried out by BRO in the aftermath of damages that took place due to Glacial lake outburst flood (GLOF) in Uttarakhand’s Chamoli district on 07th Feb 2021, which triggered an avalanche and deluge that washed away hydroelectric stations and trapped some workers. The GLOF in the Rishiganga River also washed away a 90 meter RCC bridge of BRO on Joshimath – Malari road near Raini Village. This bridge was the only link to Niti border.

DG Border Roads said that “BRO true to its motto “ShramenaSarvamSadhaym” has quickly swung into action for rescue and rehabilitation work by inducting more than 100 Vehicles / Equipment and plants which include about 15 Heavy Earth Moving Equipments like Hydraulic Excavators, Dozers, JCBs, Wheel Loaders, etc. BRO has also Air inducted critical Equipment with the help of the Indian Air Force. Almost 20 teams of 21 BRTF under Project Shivalik have been deployed for rescue and rehabilitation purposes. After the initial rescue, BRO started work for re-establishing connectivity on all required fronts. The site was very challenging due to steep cliff on the far bank and 25-30 mtr high debris/ muck on the other side, however, BRO has overcome these challenges, and construction of abutment on the far bank has been completed and work on the home bank is progressing on a war footing, Bailey bridge components are being sourced from various locations.”

While lauding the hard work and sincere efforts being put in by team Shivalik, DG Border Roads told that BRO is working round the clock under extreme weather conditions to re-establish connectivity at the earliest by launching a bailey bridge of 200 feet. He also said that although the primary task of BRO is to ensure that lines of communication are through, BRO has also been playing a pivotal role in search and rescue operations to locate the missing persons. Towards this BRO has deployed four heavy-duty machines and has been able to recover some bodies so far from Raini power house location. BRO is working in close coordination with the State Government. He also thanked the State Government for providing support and assistance to BRO in accomplishing their task.