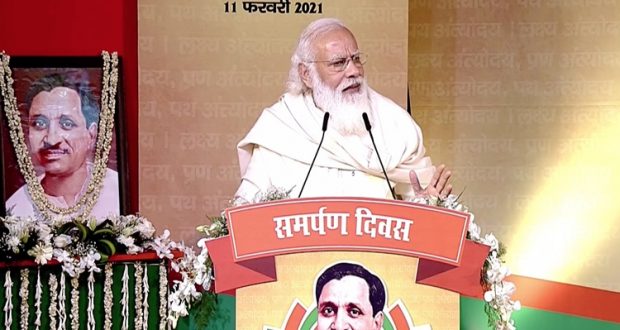 Self-reliant India campaign is becoming the medium for building the future :Narendra Modi

in National February 11, 2021 Comments Off on Self-reliant India campaign is becoming the medium for building the future :Narendra Modi 270 Views

Newdelhi:11/2/21:Prime Minister Narendra Modi has said, the self-reliant India campaign is becoming the medium for building the future of the poor, farmers, laborers, and middle class.

Addressing BJP MPs on the Death Anniversary of Pandit Deendayal Upadhyaya, Mr. Modi said, the transformational changes taking place in the field of infrastructure will make the lives of citizens easier. Prime Minister said, when India’s stature is rising rapidly globally, every Indian will be proud of it. He said the policy for the nation is paramount in our politics. He said, Deendayal Upadhyaya’s ideas are still relevant and he is an inspiration for al