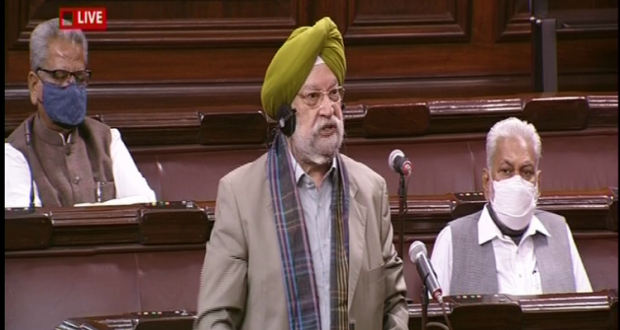 in National February 11, 2021 Comments Off on Centre has not received any proposal so far from the Government of Odisha for metro railway network 216 Views

New Delhi: 11/2/21:The Centre has not received any proposal so far from the Government of Odisha for metro railway network. It was informed by the Union Urban and Housing Development Minister Hardeep Singh Puri in the Rajya Sabha while responding to an unstarred question asked by BJP MP from Odisha Ashwini Vaishnaw on Wednesday.

Puri informed the Upper House that State Governments are responsible for initiating, developing, and funding urban transport infrastructure including metro rail projects as urban transport is a State subject.

The Centre extends financial supports for metro rail proposals in cities or urban agglomerates, on the basis of extant policy, the feasibility of the proposal and availability of resources, as and when posed by concerned State Governments, the minister added.

The BJP MP sought to know whether Centre had plans for a metro rail project in Odisha.

In 2014, the Odisha government had signed an agreement with Secunderabad-based Balaji Railroad System Limited (BRS) to draw up a detailed project report (DPR) for a metro rail service between Cuttack and Bhubaneswar.

The company was to prepare the DPR of the mass rapid transit system (MRTS) covering the 30-km distance between the two cities.

The State government had mooted the introduction of the metro rail in the twin city-Bhubaneswar-Cuttack in 2013.

In 2019, Odisha Governor Ganeshi Lal, while addressing the inaugural session of the 16th Odisha Legislative Assembly had said that the State government will attempt to connect Cuttack with smart city Bhubaneswar by Metro train.

2021-02-11
Editor in chief
Previous: Odisha government directed Collectors to Prepare dist-specific projects
Next: Lingaraj Temple Trust Board has demanded the withdrawal of the draft notification on heritage by laws