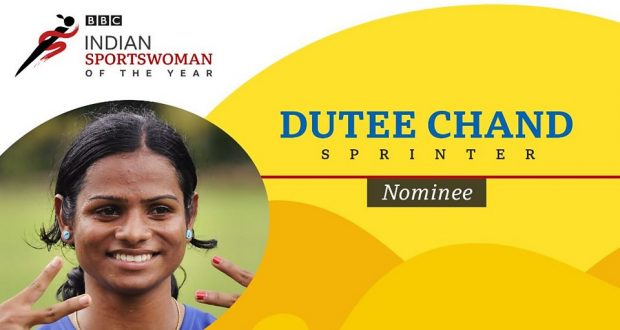 in Sports February 9, 2021 Comments Off on Odisha “s sprinter Dutee Chand nominated for BBC Indian Sportswomen of the year 283 Views

Newdelhi:9/2/21:The accolade honours the contributions of Indian sportswomen and celebrates the achievements of women in sport in the country.

The BBC launched the inaugural edition of the award in February 2020 and, following a tumultuous 12 months in which the coronavirus pandemic has affected all areas of life, the campaign returns for its second year.

Also recognised this year is the Emerging Sportswoman of the Year, and there is also an award for Lifetime Achievement.

A panel selected by the BBC compiled the shortlist of Indian sportswomen. The jury includes some of the most authoritative sports journalists, experts, and writers across India.

The five sportswomen who received the most number of votes by jury members have been nominated for public voting online.

Voting is open until Wednesday, 24 February at 18:00 GMT and the winner will be announced on Monday, 8 March at a virtual ceremony in Delhi and on the BBC Sport website. This year’s BBC ISWOTY will also feature a ‘Sports Hackathon’ in which multilingual journalism students from across India will collectively create new Wikipedia entries on Indian sportswomen across seven languages – English, Hindi, Gujarati, Marathi, Punjabi, Tamil, and Telugu, aimed at enhancing the presence and representation of Indian sportswomen online.

“I am delighted that the BBC Indian Sportswoman of the Year Award is returning for a second time. It is a brilliant opportunity to celebrate female athletes from across the country, and I’m pleased the BBC is leading the way in recognising their successes,” said Tim Davie, the BBC’s director-general

2021-02-09
Editor in chief
Previous: Expression of Interest invited for setting up of Mega Food Parks
Next: Signing ceremony of MoU for the construction of the Lalandar “Shatoot” Dam in Afghanistan