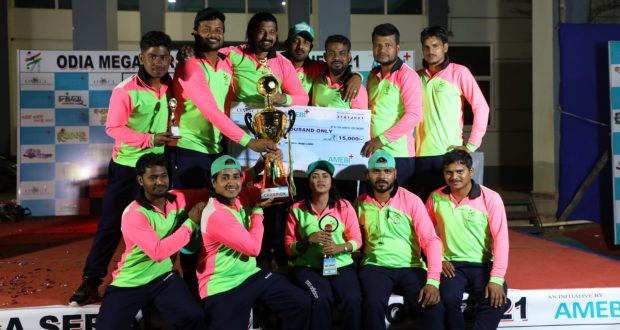 in Entertainment, Sports February 1, 2021 Comments Off on ‘Jibansathi’ Team Champion  Chiku Samal is the best batsman and Amit Kumar is the best bowler 438 Views

Bhubaneswar;1/2/21; The ‘Odia Mega-Serial Cricket League’, organized at the KIIT Sports Ground in Bhubaneswar, has come to an end. The two-day competition, sponsored by AMEBI Plus, was won by the ‘Jibansathi’ team while the ‘Mo Dehe Bolide To Deha Kala’ team was runners-up. The Jibansathi team won the title, beating 12 teams. Chiku Samal (Mo Dehe Bolide To Deha Kala) has been declared the best batsman and Amit Kumar (Jibansathi) the best bowler. On the first day, seven qualifying or competition round matches were played with 14 teams, of which ‘Kuanri Bohu’, ‘Nua Bohu’, ‘Mahadevi’, ‘Singhadwara’, ‘Nananda putuli’, ‘Sindoorara Adhikar’, ‘Jibansathi’ and ‘Mo Dehe Bolide to Deha Kala’ team advanced to the quarterfinals. 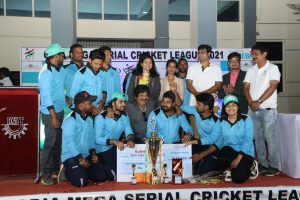 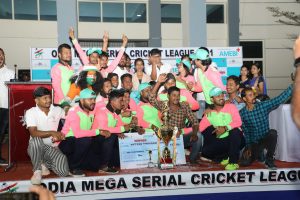 The second-day celebrations were attended by Padma Shri Dilip Tirkey and Shraddhanjali Samantaray as guests. Shyamaprasad Mishra, Sreejit Satapathy, Dwipayan Majumdar, Ratikanta Satapathy, Gargi Mohanty, Basant Sahu, Anukul Rout, among others, were present. BaradaPrasanna Patra, Ajay Singh, Amit Kumar, and Sarada Prasanna Patra were instrumental in organizing the competition. The umpires of the KIIT Sports Academy and the Odisha Cricket Association officiated the match. The ‘Odia Mega-Serial Cricket League’ brought a rare opportunity for the Tele artists. It was aimed at conveying positive thoughts and health awareness and entertaining the spectators through friendly matches.