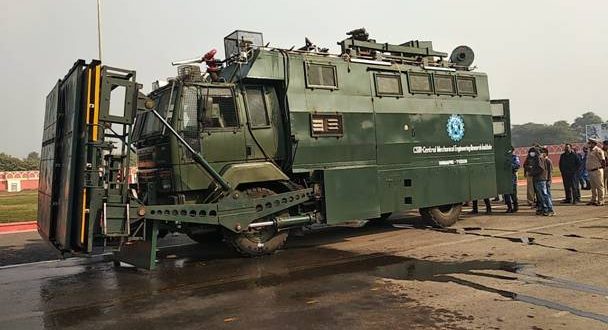 Newdelhi:1/2/21; In a view to elevate modern technical support to paramilitary forces engaged in maintaining law and order situation; train and equip them with advanced options, CSIR has demonstrated its three innovative variants ‘Compact, Medium, Heavy’ category of Mob Control Vehicles (MCVs) to a team of MHA recommended members under the leadership of IG (RAF), CRPF. The demonstration was successfully carried out at Parade Ground, CRPF Group Centre, Gurugram recently. This is a first of its kind advanced indigenous design and feature development in the country.

The MCVs have been designed, developed, and demonstrated by one of the CSIR’s constituent laboratory ‘Central Mechanical Engineering Research Institute’ (CMERI) based in Durgapur, which had brought indigenous tractor revolution in India. The Heavy category of these MCV prototypes has a 7.5-ton payload capacity. While the Medium category is of 2.5-ton payload capacity, the compact one is a tractor-based vehicle for easy maneuvering. The key requirement and followed specifications have been evolved, formulated with the involvement of various designated stakeholders. Tractor based MCV in Operation