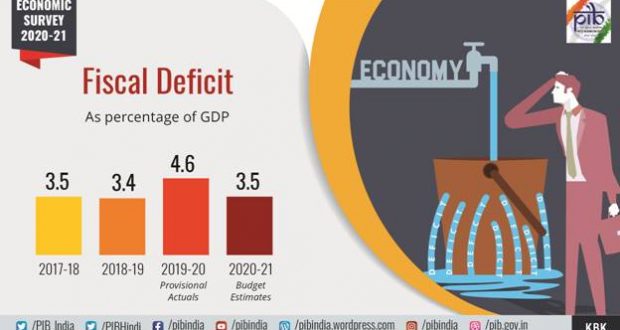 States allowed to borrow more, beyond their eligibity upto 2% Of GSDP

in National January 30, 2021 Comments Off on States allowed to borrow more, beyond their eligibity upto 2% Of GSDP 272 Views

Newdelhi:29/1/21;The Economic Survey highlights that fiscal policy response of the Government has been a combination of demand and supply side policies under the ambit of ‘Aatma Nirbhar Bharat’ to cushion against the pandemic shock, and subsequently fuel the economic recovery. The Union Minister for Finance and Corporate Affairs Smt. Nirmala Sitharaman, tabled the Economic Survey 2020-21 in the Parliament today. The Survey observes that “The fiscal policy response of the Government of India to the pandemic was distinct from other countries. Unlike many other countries that chose a front-loaded grand stimulus package for revival of the economy, Government of India adopted a step-by-step approach.”

The Economic Survey highlights that the Government carried out world’s largest food programme, direct transfers to Jan Dhan accounts, government guarantees for credit, etc.The focus of the fiscal stimulus was widened to boost the domestic demand such as ramping up of capital expenditure, Production Linked Incentives and other schemes to revive consumption demand. 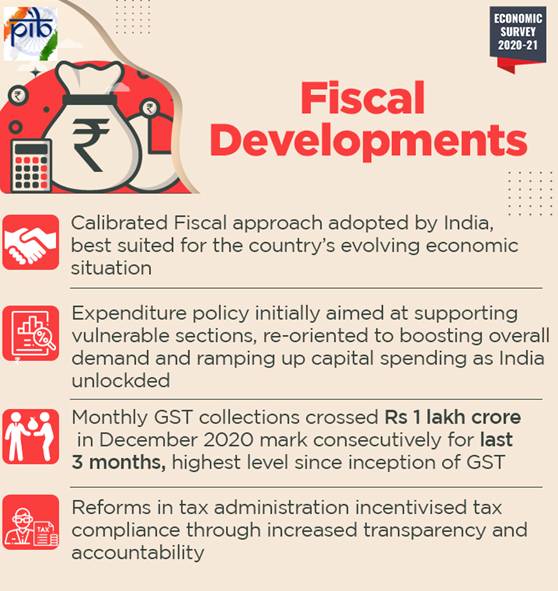 The Survey states that corporate and personal income tax have come down in 2019-20 PA mainly due to moderation in growth and implementation of structural reforms like corporate tax rate cut. But recovery is evident on the revenue front, as the monthly gross GST collections  has crossed the Rs. 1 lakh crore mark consecutively for the last 3 months. Monthly GST revenues for the month of December 2020 stood at Rs. 1.15 lakh crore, after registering a 12 per cent growth in the GST revenues over December 2019. This has been the highest monthly GST collection since the introduction of GST.

The revenue collections upto November 2020 as against the budgeted are illustrated below:

As per the Survey, “the average Gross Fiscal Deficit Budget Estimate for States that presented their budgets before the outbreak of COVID-19 was 2.4 per cent of GSDP, while the average for budgets presented post-lockdown was 4.6 per cent of GSDP”. In order to re-orient the focus of the States’ fiscal policy on capital expenditure, Central Government has announced Scheme for Special Assistance to States for Capital Expenditure during FY 2021. Also, one-time special dispensation was allowed to the States by allowing additional borrowings amounting to Rs. 0.59 crore for year 2019-20 beyond the State’s eligibility. Additional borrowing limit of up to 2 percent of Gross State Domestic Product (GSDP) was allowed to the States, of which 1% was conditional on state level reform implementation.

The economic survey observes that in the wake of the global pandemic outbreak, the General Government (Centre plus States) is expected to register a fiscal slippage on account of the shortfall in revenue and higher expenditure requirements. This deviation from the path of fiscal consolidation may however be transient as the fiscal indicators may rebound with the recovery in the economy. The calibrated approach adopted by India allows space for maintaining a fiscal impulse the coming year. The growth recovery would facilitate buoyant revenue collections in the medium term, and thereby enable a sustainable fiscal path.

2021-01-30
Editor in chief
Previous: Improved Monetary Policy Transmission; Repo Rate cut by 115 BPS
Next: President says our goal of Atmanirbhar Bharat will be strengthened by self reliance in agriculture