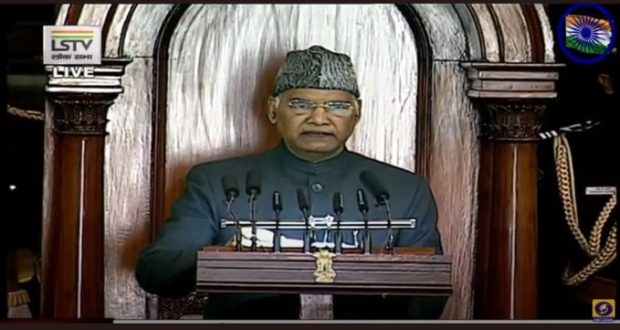 in National January 30, 2021 Comments Off on President says our goal of Atmanirbhar Bharat will be strengthened by self reliance in agriculture 266 Views

New Delhi;29/1/21; The Budget Session of Parliament began today. The session began with the address of President Ram Nath Kovind to the joint sitting of both Houses of Parliament. Addressing the session, the President said, the Constitution gives us the right to freedom of expression but it also expects that we abide by the laws and rules with equal sincerity. President Kovind termed the recent acts of dishonoring the National Flag and showing disrespect to the auspicious occasion of Republic Day as unfortunate.

The President said, our goal of Atmanirbhar Bharat will be strengthened by self-reliance in agriculture. He said, the three farm laws enacted by the Parliament in the previous session aim at further helping the farmers in the country as they provide more rights and power to the farmers. Mr. Kovind added that over ten crore small and marginal farmers have started getting benefits from these reforms in the agriculture sector.

The President asserted that the Central government has taken several measures to improve the condition of farmers in the country like the implementation of the recommendations of the MS  Swaminathan Committee report on Agriculture. It has increased the MSP of crops by 1.5 times.

Talking about the fight against COVID-19, Mr. Kovind expressed satisfaction that due to timely decisions of the government, the lives of millions of people have been saved and the number of corona patients is gradually decreasing in the country.

President Kovind said, the country has started recovering from the damage done to the economy by the COVID pandemic amid the center’s incessant efforts to save the life of every countryman.
Mr. Kovind added that even in these difficult times, India has emerged as an attractive place for the investors of the world.

The President also said by making lakhs of corona vaccine doses available to several countries India has also fulfilled its obligation towards humanity in these times of difficulty.

He said it is a delightful coincidence that the nation started construction of the new Parliament while moving towards the 75th year of Independence.

President Kovind said the government is fully committed to protecting the interests of the country. Referring to the Galwan Valley incident, he said, additional forces have been deployed to protect India’s sovereignty over the Line of Actual Control.

Talking about women’s participation in the growth story of the nation, he said the Government has taken several decisions in this direction, such as appointing women in the Fighter stream of the Indian Air Force and the Military Police for the first time. President Kovind said, the Centre also came up with the ‘Suvidha’ scheme under which sanitary napkins are made available at a nominal cost of 1 rupee.

President Kovind said efforts are underway to transform Brahmaputra and Barak rivers as streams of development and this will benefit all sections of people in the North East.

Talking about development initiatives in Jammu and Kashmir, he said after becoming a Union Territory, elections to the Ladakh Autonomous Hill Council have been held successfully a few months back. He said after the implementation of the ‘Ayushman Bharat Health Scheme’, every family of Jammu and Kashmir is assured of free treatment worth 5 lakh rupees.

President Kovind said after abrogation of provisions of Article 370 the people of Jammu and Kashmir, have been empowered with new entitlements. He also mentioned the commencement of the construction of a grand Ram Mandir temple in Ayodhya after the Supreme Court judgment. President also informed that the country will witness the beginning of the ‘Amrut Mahotsav’ from this year which will mark the commencement of the celebrations towards the 75th year of India’s Independence.

The Government has convened an all-party meeting tomorrow to seek the support of political parties to ensure smooth conduct of business in the Lok Sabha and the Rajya Sabha. AIR Correspondent reports that on Sunday, Rajya Sabha Chairman M Venkaiah Naidu has called for a meeting of leaders of all parties in the Upper House.

2021-01-30
Editor in chief
Previous: States allowed to borrow more, beyond their eligibity upto 2% Of GSDP
Next: Supreme Court panel holds talks with 17 farmer organisations from 11 states over Centre Farm Laws