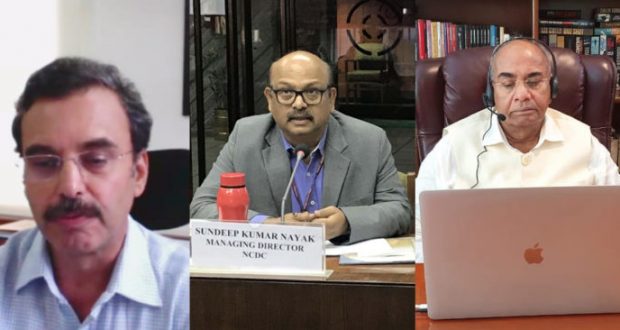 GOVT GEARED UP FOR PROMOTION AND DEVELOPMENT OF SEAWEED CULTIVATION BUSINESS; ROPES IN NCDC &COOPERATIVE SECTOR

in Business, National January 30, 2021 Comments Off on GOVT GEARED UP FOR PROMOTION AND DEVELOPMENT OF SEAWEED CULTIVATION BUSINESS; ROPES IN NCDC &COOPERATIVE SECTOR 418 Views

Bhubaneswar;29/1/21:An International Webinar on Entrepreneurship Development on ‘Seaweed Business by Cooperatives’ was held on 28 January 2021. It was jointly organized by the Department of Fisheries, Govt. of India, LINAC-NCDC (National Cooperative Development Corporation), Department of Agriculture, Cooperation& Farmers Welfare, Govt. of India, and NEDAC, an International organisation based in Bangkok.

Nayak informed that coastal countries are participating in the webinar to deliberate on the potential and challenges in the seaweeds farming. Experts from countries like Vietnam, Philippines, and Canada among others participated in the event. Nayak also emphasised on efforts required for ties between Asia pacific nations to boost the seaweed cultivation.

The credit for realizing the worth of industrial-scale production of seaweed in uplifting the income of farmers goes to Dr. Rajeev Ranjan, Secretary at the newly created Department of the Fisheries, Govt. of India. Ranjanstated that seaweed has the potential to transform the way of farming. With the current world production valued at around USD 12 billion, it is estimated to shoot up to USD 26 billion by 2026.

Lamenting India’s meager share, Ranjan said the country’s potential has been estimated at a million tonnes, a fourth of which in Tamil Nadu alone. Raised to that level, this vocation can give employment to 6-7 lakh people. Given that India is endowed with around 7,500 km coastline, the Government is all set to take it to an industrial scale to help the coastal communities have a sustainable livelihood as well as combat climate change threats. 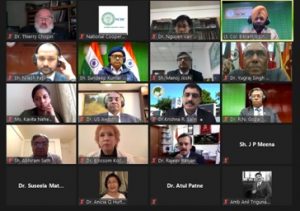 The Government has allocated Rs 637 crore for the cultivation of these nutrition-rich marine plants, as part of the Rs 20,050-crore central scheme Pradhan Mantri Matsya Sampada Yojana—to be spent over the next five years, mainly as subsidy support. Intensive efforts will be made by the implementing agencies to prioritize the formation and promotion of FFPOs, support to cooperatives and women SHG’s in the potential coastal areas in the country, under the scheme, said Dr. Ranjan.

Manoj Joshi, Additional Secretary of the Ministry of Food and Processing Industry stressed on focusing on a few clusters, to begin with, and ensure convergence of the schemes to scale up the production. He said his ministry is all for extending support to the seaweed based food and in fact already have a scheme Centrally Sponsored: PM Formalisation of Micro food processing Enterprises Scheme (PM-FME Scheme) for providing financial, technical, and business support for up-gradation of existing micro food processing enterprises.

On the similar lines, Dr. Atul Patne, Commissioner Fisheries, Govt. of Maharashtra, said that Maharashtra too has started taking steps in this direction to harness the potential of seaweed. “State has a 720 Km Coastline comprising of 7 coastal districts. 12 Talukas from 4 coastal districts are primarily selected for seaweed cultivation in coordination with UNDP. Survey for the selection of suitable sites to cultivate seaweed need to be carried out by Central Fisheries Org. /Institutes immediately on priority,” he said.

2021-01-30
Editor in chief
Previous: Lord Jagannath and his siblings will be adorned with the spectacular ‘Rajarajeswara Besha’
Next: 13th Edition of Aero India international air show, scheduled to be held from February 3 to 5