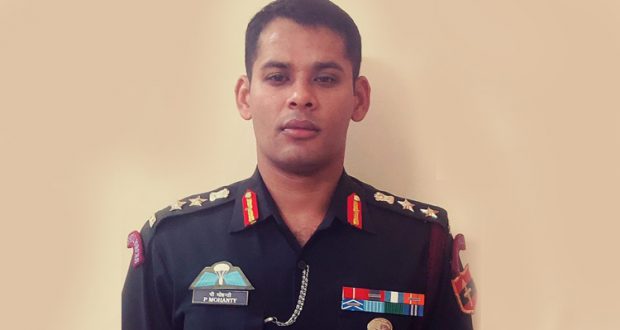 in District Diary January 30, 2021 Comments Off on Colonel Punyabachi Mohanty has made many proud Awarded Yudh Seva Medal 1,016 Views

Soro(Balasore):29/1/21: Following in the footsteps of his father, Commanding Officer of the Indian Army’s 9 Para (Special Forces) – Colonel Punyabachi Mohanty has made many proud because of the acknowledgment he has received in the form of military decorations. On this Republic Day, Col Mohanty was awarded the Yudh Seva Medal for his gallantry and distinguished service.

The Army officer showed exemplary courage and an indomitable spirit during the recent clash with the Chinese troops at the Line of Actual Control (LAC). Serving in the 9th Battalion of the Parachute Regiment (Special Forces) Army, Mohanty had also received the Sena Medal (Gallantry) in 2019 for his outstanding services. After completing his training at the Indian Military Academy (IMA), Punyabachi Mohanty was commissioned as an officer at the Dogra Infantry Regiment. When he displayed an above-par proficiency during the Commando training, he was recommended and inducted to the Para Special Forces.

Col Punyabachi’s father Lieutenant General JK Mohanty retired as the chief of Central Army Command. now live in his native village Itua in Soro in Balasore district. He was a distinguished Infantry officer with a rich and varied career profile. He was also honored with the Sena Medal in 1993, Vishisht Seva Medal in 2003 and the Uttam Yudh Seva Medal in 2004 for significant contributions in different military operations.