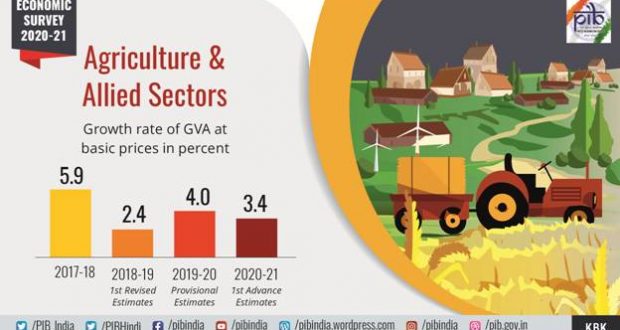 in National January 30, 2021 Comments Off on India’s agricultural sector has shown its resilience amid the adversities of COVID-19 induced lockdowns 266 Views

Newdelhi:29/1/21; India’s agricultural sector has shown its resilience amid the adversities of COVID-19 induced lockdowns. The Agriculture and Allied activities clocked a growth of 3.4 percent at constant prices during 2020-21(first advance estimate) says the Economic Survey. The Union Minister for Finance & Corporate Affairs, Smt Nirmala Sitharaman presented the Economic Survey 2020-21 in Parliament today.

The Economic Survey observes that as per the Provisional Estimates of National Income released by CSO on 29th May 2020, the share of Agriculture and Allied Sectors in Gross Value Added (GVA) of the country at current prices is 17.8 percent for the year 2019-20. The Economic Survey says that “The Union Budget for 2018-19 had announced that MSPs would be kept at the level of 1.5 times of the cost of production. On the basis of the above-mentioned principle, Government recently increased the MSPs for all mandated kharif and rabi crops for 2020-21season.”

On recent agricultural reforms the Economic Survey says “The three agricultural reform legislations are designed and intended primarily for the benefit of small and marginal farmers which constitute around 85 per cent of the total number of farmers and are the biggest sufferer of the regressive APMC regulated market regime. The newly introduced farm laws herald a new era of market freedom which can go a long way in the improvement of farmer welfare in India.”

The Economic Survey notes “Given the large proportion of resource constrained small and marginal farmers in India, timely availability of adequate credit is fundamental for the success of farming activities.” The agricultural credit flow target for the year 2019-20 was fixed at ₹13,50,000 crores and against this target the achievement was ₹13,92,469.81 crores. The agriculture credit flow target for 2020-21 has been fixed at ₹15,00,000 crores and till 30th November, 2020 a sum of ₹ 9,73,517.80 crores was disbursed. The Economic Survey notes that the Agriculture Infrastructure Fund announced as a part of Atma Nirbhar Bharat Abhiyan will further boost credit flow to the agriculture sector.

According to the Economic Survey, consequent upon budget announcement on inclusion of livestock sector in Kisan Credit Card in February 2020, 1.5 crores dairy farmers of milk cooperatives and milk producer companies’ were targeted to provide Kisan Credit Cards (KCC) as part of Prime Minister’s Atma Nirbhar Bharat Package. As of mid January 2021, a total of 44,673 Kisan Credit Cards (KCCs) have been issued to fishers and fish farmers and an additional 4.04 lakh applications from fishers and fish farmers are with the banks at various stages of issuance.

The Survey observes that Pradhan Mantri Fasal Bima Yojana (PMFBY) is a milestone initiative to provide a comprehensive risk solution at the lowest uniform premium across the country for farmers. The PMFBY covers over 5.5 crore farmer applications year on year. As on 12th January, 2021, claims worth Rs. 90,000 crores have already been paid out under the Scheme. Aadhar seeding has helped in speedy claim settlement directly into the farmers’ accounts. Even during COVID-19 lock down period nearly 70 lakh farmers benefitted and claims worth Rs. 8741.30 crores were transferred to the beneficiaries.

The Economic Survey says “An amount of `18000 crore have been deposited directly in the bank account of 9 crore farmer families of the country in December, 2020 in the 7th installment of financial benefit under the PM-KISAN scheme.”

Regarding Livestock Sector the Economic Survey says “The livestock sector grew at CAGR of 8.24 per cent during 2014-15 to 2018-19. As per the estimates of National Accounts Statistics (NAS) 2020 for sector wise Gross Value Added of Agriculture and allied sector, the contribution of livestock in total agriculture and allied sector GVA (at Constant Prices) has increased from 24.32 per cent (2014-15) to 28.63 per cent (2018-19). Livestock sector contributed 4.19 per cent of total GVA in 2018-19.”

The Economic Survey notes that Fish production in India has reached an all-time high of 14.16 million metric tons during 2019-20. Further, the Gross Value Added (GVA) by the Fisheries sector to the national economy stood at ₹2,12,915 crores constituting 1.24 per cent of the total national GVA and 7.28 per cent of the agricultural GVA.

The Economic Survey notes that during the last 5 years ending 2018-19, Food Processing Industries (FPI) sector has been growing at an Average Annual Growth Rate (AAGR) of around 9.99 per cent as compared to around 3.12 per cent in Agriculture and 8.25 per cent in Manufacturing at 2011-12 prices.