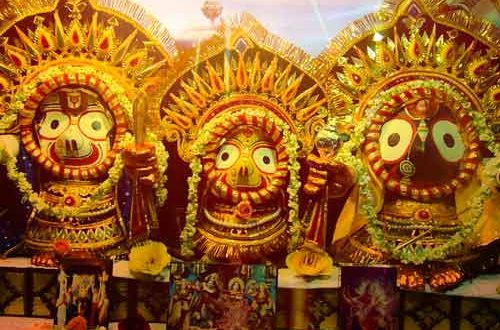 in State News January 28, 2021 Comments Off on Lord Jagannath and his siblings will be adorned with the spectacular ‘Rajarajeswara Besha’ 473 Views

Puri:28/1/21: Lord Jagannath and his siblings will be adorned with the spectacular ‘Rajarajeswara Besha’ also known as ‘Suna Besha’ at Srimandir here on the auspicious occasion of ‘Pausha Purnima’ on Thursday.

As per the rituals, the Holy Trinity will be decked up in golden attire after the ‘Chandana Lagi’ ritual. In the morning, Mangala Alati, Mailam, Tadap Lagi, Abakash Niti, Gopal Ballav, Shakala Dhupa rituals were performed followed by the conduct of Jala Lagi and Sarbanga.

A large number of devotees generally visit the 12th-century shrine on this pious day to get the glimpse of the Holy Trinity in the dazzling avatar on the Ratna Singhasana (Jewel Throne). It may be mentioned here that the Shree Jagannath Temple Administration has put a cap on the entry of maximum 30000 devotees into the temple due to Covid restrictions.

As per mythology, Lord Rama took over the throne in Ayodhya today after 14 years of exile and therefore Lord Jagannath, an incarnation of Lord Vishnu, is decked up in king attire to mark the day. Pausha Purnima is a significant day for Hindus which falls on the full moon day of Pausha month in the Hindu calendar.

Similarly, the ‘Pushyabhisek’ ritual of Gajapati Maharaja of Puri Dibyasingha Deb will be performed today. As per the tradition, after ‘Panchadebata’ and ‘Shastriya’ Pujas, the special ritual will be conducted.

2021-01-28
Editor in chief
Previous: Adivasi Mela has been inaugurated at Unit-1 Adivasi ground in Bhubaneswar
Next: GOVT GEARED UP FOR PROMOTION AND DEVELOPMENT OF SEAWEED CULTIVATION BUSINESS; ROPES IN NCDC &COOPERATIVE SECTOR