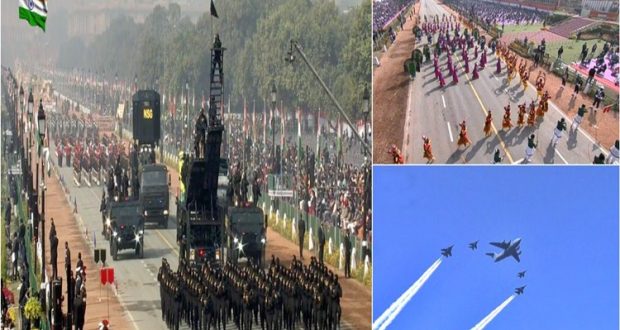 in National January 26, 2021 Comments Off on Nation celebrates 72nd Republic Day with zeal and pride 221 Views

Newdelhi:26/1/21:Nation is celebrating its 72nd Republic Day today. The main function was held at Rajpath in the National Capital where President Ram Nath Kovind took the salute of the parade.

A 122-member proud contingent of the Bangladesh armed forces also marched on Rajpath.

This morning, the Republic Day Parade ceremony started with Prime Minister Narendra Modi visiting the National War Memorial where he led the nation in paying solemn tributes to the fallen heroes by laying a wreath.

The National Flag was unfurled followed by the National Anthem with a booming 21-gun salute. The parade commenced with President Ram Nath Kovind taking the salute.

This time due to the COVID-19 pandemic, the parade route has been shortened. The parade started from Vijay Chowk, as usual, but  culminated at the National Stadium instead of ending at the Red Fort. Only around 25 thousand spectators were allowed to witness the parade as compared to the average of 1.15 lakh people every year. Children below 15 years and the elderly with co-morbidities were not permitted. This year, there was no Chief Guest from a Foreign country due to the pandemic. The event was held following all necessary Covid -19 preventive protocols.

2021-01-26
Editor in chief
Previous: Odisha has celebrated the 72nd Republic Day to commemorate the date of the adoption of the Constitution of India
Next: Military might, cultural diversity, social and economic progress on display during the Republic Day celebrations