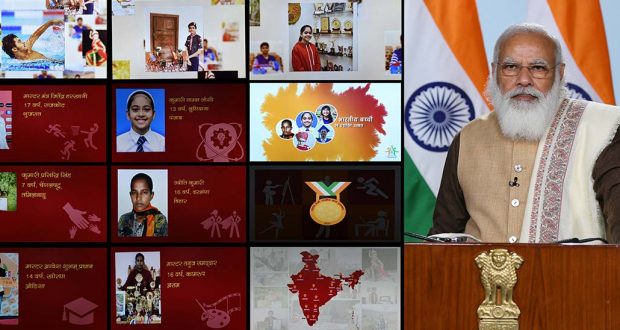 in National January 25, 2021 Comments Off on PM interacts with recipients of Rashtriya Bal Puraskar, 2021 254 Views

The Prime Minister observed that when a small idea is supported by the right action, results are impressive. He asked the children to believe in action as this interplay of ideas and action will trigger many actions inspiring people for greater things. The Prime Minister advised the children not to rest on their laurels and they should continue to strive for better results in their lives.

The Prime Minister asked the children to keep three things, three pledges, in their minds. First, pledge of Consistency. There should not be any slackening of speed of the action. Second, pledge for the country. If we work for the country and treat every work in terms of the country then that work will become greater than the self. He asked the children to think about what they can do for the country as we enter the 75th year of independence. Third, the pledge of humility. Every success should spur us to be more polite as our humility will enable others to celebrate our success with us, The Prime Minister concluded.

The Government of India has been conferring the Bal Shakti Puraskar under Pradhan Mantri Rashtriya Bal Puraskar to the children with exceptional abilities and outstanding achievement in the fields of innovation, scholastic achievements, sports, arts & culture, social service, and bravery. This year, 32 applicants from across the country, under different categories of Bal Shakti Puraskar, have been selected for PMRBP-2021.

2021-01-25
Editor in chief
Previous: 2021 Padma Awards Announced: Sudarshan Sahoo from Odisha will awarded Padma Vibhushan
Next: A self-reliant India manufactured its own COVID vaccine and added a glorious chapter to well being of humanity :Ramnath Kovind