Top Headlines
Home » Entertainment » Prawaas is a story of someone who realizes his why and finds out his time on earth is limited: Director Shashank Udapurkar 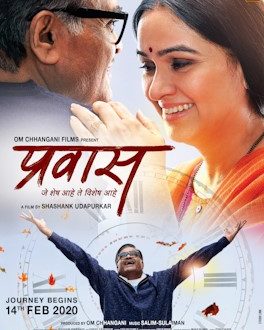 in Entertainment, Uncategorized January 24, 2021 Comments Off on Prawaas is a story of someone who realizes his why and finds out his time on earth is limited: Director Shashank Udapurkar 268 Views

Panaji,  ( Goa):23/1/21; “Earlier, we used to regard the whole world as one family: Vasudhaiva Kutumbakam. But now, even the family is not regarded as family. We have to stop running the rat race; we have to stay happy and realize that we can be happy only by helping others.” This is the heartfelt message being conveyed by Shashank Udapurkar, Director of the Marathi film Prawaas, which has been screened at the 51st International Film Festival of India, in the Indian Panorama Feature Film Section. The film tells the story of the journey of life and emphasises the core issues of human life. It is also a contender for the prestigious ICFT UNESCO Gandhi Medal, given to an IFFI film that best reflects Mahatma Gandhi’s ideals of peace, tolerance, and non-violence. The Director was addressing a press conference in Goa today, January 23, 2021, after the screening of the film at the festival.

Prawaas chronicles the journey of an elderly couple Abhijat Inamdar and Lata. Abhijat is in his sixties, and unwell. Both his kidneys have failed, and his survival depends on dialysis, which he has to undergo twice a week. He has many regrets in life, and he believes his life is as good as over. Lata has resigned herself to the situation. Then one day, realisation strikes him, and he begins a new phase in his life.

Abhijat realizes that there are so many people who need help and he starts helping them in their problems. This gives him confidence in himself, a great sense of satisfaction, and very unique identity. The film

Udapurkar said that his film reminds us that every person has a limited time on this earth and that it’s important to understand how one lives his life. “In this materialistic world, we are running a rat race. It is said that there are two important days in your life; one, the day you are born, and the other, the day you find out why. Prawaas is a story of someone who finds this out and realizes that one has only a very limited time in front of him. The protagonist Abhijat resembles everyone. He teaches us that when you help others and live your life meaningfully, you will be the happiest person on earth.” He exhorts that “you should chase your heart, this is what Prawaas conveys”.

To a question seeking guidance on how one may quit the rat race, Shashank made a simple yet powerful call for embracing minimalism. “We are in a rat race, minimalism is the need of the hour. In the modern world, choices are forced upon us. For example, we are told that we need to change our mobile phones twice every year. This culture makes us want more. Reducing demands and wants is the only way to get out of this.”

Why don’t more people follow this path? Udapurkar answers: “There is only one Gandhi. Likewise, there are very few people who follow minimalism. It is both very simple and very difficult. Following a minimalist path is an uphill task.”

Shashank Udapurkar has worked as a lead actor in Marathi films like ‘Dhava Dhav’ and  ‘Kartavya’. ‘Anna’ was his debut film as a director and ‘Prawaas’ his second. He has also worked as a screenplay and dialogue writer.

IFFI collaborates with the International Council for Film, Television and Audiovisual Communication (ICFT) Paris, to present a special ICFT prize consisting of the UNESCO Gandhi Medal. The UNESCO issued a commemorative medal in 1994, marking the 125th anniversary of the birth of Mahatma Gandhi. Since then the ICFT UNESCO Gandhi Award is being given to a film that best reflects Mahatma Gandhi’s ideals of peace, tolerance, and non-violence. Ten films, including Prawaas, are competing for the medal in this edition of the festival.

2021-01-24
Editor in chief
Previous: Final stage of Union Budget 2021-22 commences with Halwa Ceremony
Next: Naveen Patnaik is the best performing Chief Minister as per the India Today Group-Karvy Insights Mood of the Nation January 2021 poll