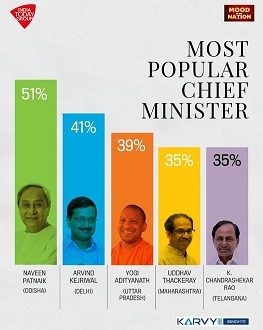 in State News January 24, 2021 Comments Off on Naveen Patnaik is the best performing Chief Minister as per the India Today Group-Karvy Insights Mood of the Nation January 2021 poll 400 Views

New Delhi:24/1/21: Odisha Chief Minister Naveen Patnaik has been ranked the best performing chief minister at the state level, according to the India Today Group-Karvy Insights Mood of the Nation (MOTN) January 2021 poll.

For the most popular chief minister rating, the respondents of the state were asked to evaluate the performance of their own chief ministers.

2021-01-24
Editor in chief
Previous: Prawaas is a story of someone who realizes his why and finds out his time on earth is limited: Director Shashank Udapurkar
Next: Outbreaks of Avian Influenza (Bird flu) have been confirmed in 9 States