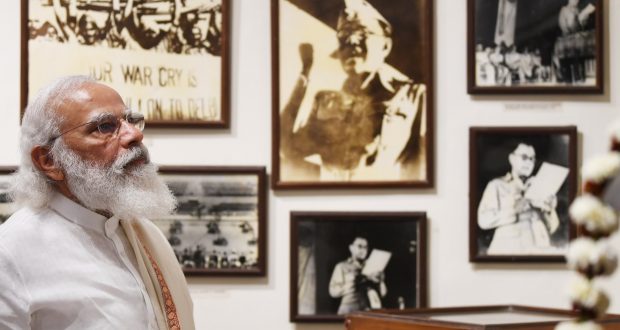 in National January 24, 2021 Comments Off on Aatmnirbhar Bengal to play a major role in Aatmnirbhar India movement: PM 284 Views

Kolkota:23/1/21:The Prime Minister, Shri Narendra Modi today recalled Netaji Subhas Bose’s statement that we should have a goal and strength that can inspire us to govern boldly with courage. In Aatamnirbhar Bharat today, we have that goal and strength.   The goal of Aatamnirbhar Bharat will be achieved through our inner strength and determination, said Shri Modi. Quoting Netaji Subhas Chandra Bose, The Prime Minister said that we should have the sole goal of contributing to our country with our blood and sweat and make India Aatamnirbhar by our hard work and innovation. He was speaking at the ‘Parakram Diwas’ celebrations at Victoria Memorial in Kolkata.

Referring to the poignant question that Netaji asked his nephew Sisir Bose before executing the daring escape, the Prime Minister said “if today, every Indian places his hand on his heart and feels the presence of Netaji, then he will hear the same question: will you do something for me? This work, this task, this goal is to make India self-reliant today. People of the country, every region of the country, every person of the country is part of this.”

The Prime Minister called for developing manufacturing capabilities with ‘zero defect and zero effect’ to make best products for the world. Netaji said, never lose faith in the dream of an Independent India, there is no power in the world that can shackle India. Indeed, there is no power that can prevent 130 crore Indians from becoming self-reliant.

The Prime Minister pointed out that Netaji Subhas Chandra Bose used to count poverty, illiteracy, disease, among the biggest problems in the country. He was always thoughtful towards the poor and put great emphasis on education. The Prime Minister reiterated that our biggest problems are poverty, illiteracy, disease, and lack of scientific production. Society will have to come together to solve these problems, we will have to make efforts together.

Prime Minister expressed satisfaction that today, the country is working tirelessly for the empowerment of the exploited and deprived sections and our farmers and women. Today every poor is getting free medical treatment and health facilities; farmers are getting modern amenities ranging from seed to market and their expenditure for agriculture is being reduced; education infrastructure is being modernized for quality and modern education for the youth; new IITs and IIMs and AIIMS are being established along with a National Education Policy suited to the needs of 21st century.

The Prime Minister said that positive changes taking place new India today would make Netaji Subhas Bose very proud. Shri Modi wondered how Netaji would feel on seeing the country getting self-reliant in the latest technologies; domination of Indians in the biggest global companies,  education and medical sector. If India’s defense forces have modern aircraft like Rafale, India is also manufacturing modern fighter planes like Tejas. Netaji would be giving his blessings on witnessing the strength of our forces and the way the country faced the pandemic and the way it achieved modern scientific solutions like vaccine indigenously and supporting other countries too. The world is witnessing strong India of his dreams from LAC to LOC. India is giving a befitting reply to any challenge to its sovereignty, said the Prime Minister.