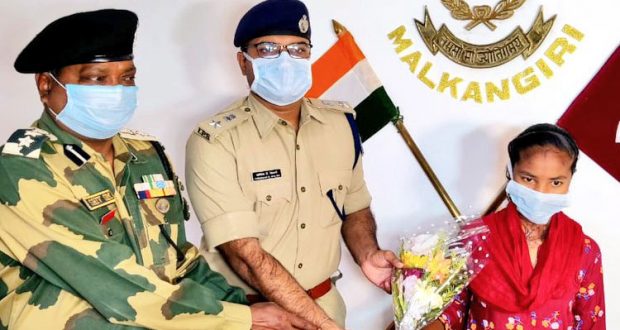 in District Diary January 24, 2021 Comments Off on A woman Maoist surrendered before the superintendent of police (SP) and Border Security Force (BSF) 288 Views

A native of Mukudipali in the cut-off Swabhimal Anchal of the district, Lachhi became an active member of the banned CPI (Maoist) outfit a year ago. Earlier, she was working as an active militia member of Maoist party for two years.

“Lachhi was also a member of Guma LOS and joined the Maoist organization one year ago. Soon she realised that women cadres are being harassed by senior members of the party and decided to desert the organization. However, she was silent apprehending an attack on her family members by the ultras,” said SP Rishikesh Dnyandeo Khilari.

She will get monetary assistance as per the Surrender and Rehabilitation Scheme of the Odisha government. It includes financial assistance for building house, pursuing studies, and getting training in a trade/ vocation of her will.
2021-01-24
Editor in chief
Previous: Veteran Odia film actor Shanti Swarup Mishra passed away
Next: 32 Children Awarded Pradhan Mantri Rashtriya Bal Puraskar- 2021:Anvesh Subham Pradhan from Odisha