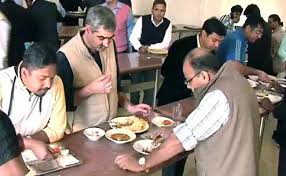 in National January 19, 2021 Comments Off on No More Food Subsidy At Parliament Canteen 324 Views

New Delhi:19/1/21: Lok Sabha Speaker Om Birla on Tuesday announced that from the upcoming Parliament session beginning this month-end, there will be no food subsidy at the Parliament canteen

He announced the new move, saying “Food subsidy at Parliament canteen has been completely removed”. Birla made the announcement addressing the media ahead of the forthcoming Budget session of Parliament that will begin from January 29.

Sources said that the savings could add up to almost Rs 17 crore annually with the removal of subsidised food at the Parliament canteen.

In the winter session of Parliament in 2019, Birla mooted a suggestion for it and the Members of Parliament unanimously decided to not avail of any subsidy at the Parliament canteen.

Birla later shared details about the time schedule of how Lok Sabha and Rajya Sabha will function in the upcoming session.

He made it clear that all MPs will have to go through RT-PCR test before joining the Parliament session and that they have been told to undergo the mandatory Covid-19 test.

The Budget session will commence with the President’s Address while the Union Budget will be presented on February 1. The session will conclude on April 8 with a recess in between from February 15 to March 8.

The President will deliver his annual address to a joint sitting of both Houses of Parliament at 11 a.m. on January 29. The two Houses will meet separately for tabling of the President’s Address.

The Economic Survey will also be tabled in both Houses in this 30-minute sitting and Finance Minister Nirmala Sitharaman will present the Union Budget at 11 a.m. on February 1.

Covid protocols will be followed in this session on the same lines as the Monsoon session.

The session is being held at a time when the government is grappling with the farmers’ agitation and vociferous demands from the opposition for the repeal of the three contentious farm laws.