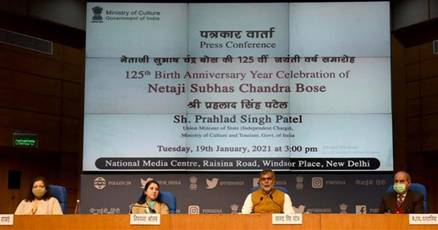 23rd January to be celebrated as “PARAKRAM DIWAS” every year

in Uncategorized January 19, 2021 Comments Off on 23rd January to be celebrated as “PARAKRAM DIWAS” every year 264 Views

Newdelhi:19/1/21:The Minister of Culture and Tourism Shri Prahlad Singh Patel announced today that the year-long celebrations to commemorate 125th birth anniversary year of Netaji Subhas Chandra Bose will formally commence on 23rd January 2021. Prime Minister, Sh Narendra Modi will preside over the inaugural event of the celebrations being held at  Kolkata, the Minister disclosed while addressing media persons in New Delhi today. The Government has decided to celebrate  23rd January as PARAKRAM DIWAS every year and a Gazette Notification to this effect has been issued today, the Minister said.

The 125th Birth Anniversary year of Netaji Subhas Chandra Bose will be celebrated in a befitting manner at the national and international level. Shri Patel informed that a High-Level Committee, headed by Prime Minister Shri Narendra Modi, has been constituted for deciding the programs and to supervise and guide the commemoration throughout the year. The Committee will provide guidance for the commemoration activities in Delhi, Kolkata, and other places associated with Netaji and Azad Hind Fauj, both in India as well as overseas

The Minister further informed that the Ministry of Culture has proposed a number of activities and projects for this year-long commemoration. The inaugural function of the commemoration will be held at Victoria Memorial in Kolkata on 23rd January 2021 presided over by the Prime Minister. A permanent exhibition on Netaji and a Projection Mapping Show will be inaugurated on the occasion. A cultural program “AmraNutonJouboneriDoot” will also be held based on the theme of Netaji. Shri Patel said “a commemorative coin and postage stamp will also be released on this day. An International Conference ‘Re-visiting the legacy of Netaji Subhash in 21st century’ and an Artists’ Camp are being organized at National Library, Kolkata on the same day.”

He further stated that the Ministry of Culture will also be organisinga programme at Netaji’s birthplace in Cuttack, Orissa.  The Union Minister for Petroleum and Natural Gas Shri Dharmendra Pradhan will participate in this programme. Another programme is also being organised    at Haripur in Gujarat which also has a symbolic association with Netaji.

Other Ministries under Govt. of India have also proposed to take up a large number of activities to commemorate this occasion. These activities will be carried out upon finalisation by the High-Level Committee.  Tourism Ministry will be sponsoring this year the National Level indigenous games including Kabaddi Tournament which has been organised for the last 37 years on Netaji’s Birth Anniversary in Madhya Pradesh’s Narshingpur District by the ‘SahyogKrida Mandal’. Netaji Football Tournament and Marathons (D/o Sports), Pada Yatras and Cycle Yatras( D/o Youth Affairs), Webinar under “Dekho Apna Desh,”  Webinar on Netaji’s life and incidents in Manipur (Ministry of Tourism), INA tune ‘Kadam KadamBadhayeJa’ being included in the Beating Retreat Ceremony – 2021 (Ministry of Defence), etc. Ministry of Civil Aviation has proposed to paint some of Air India’s aircraft with Netaji’s images, especially the ones flying to Andaman and Nicobar Islands. Ministry of Railways has proposed to name an express train after Netaji.

Ministry of Education proposes to establish 5 chairs on Netaji in 5 Indian Universities, organize online Lectures and Webinars on teachings of Netaji, etc. National Film Development Corporation under Ministry of Information & Broadcasting will organize a short-film competition on ‘How to fulfil  Netaji’s dreams for India’. Doordarshan and All India Radio will host panel discussions, produce documentaries and other programs on the life and times of Netaji.

2021-01-19
Editor in chief
Previous: If the government had not instituted Dada Saheb Phalke Award, my grandfather’s work and life would have been ended in two pages”
Next: Dharmendra Pradhan witnesses the signing of MOU between Indian Oil and NDMC for Development of Integrated Waste to Energy Facilities