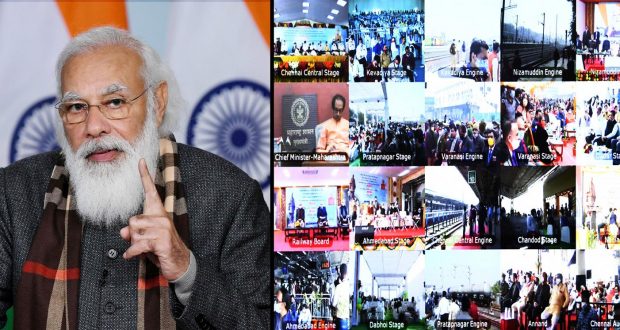 in National January 17, 2021 Comments Off on PM flags off eight trains facilitating seamless rail connectivity to Statue of Unity 220 Views

The Prime Minister said that, perhaps, for the first time in the history of Railways, trains have been flagged off for the same destinations from different corners of the country. He explained that this is because of the importance of Kevadiya as home to the Statue of Unity and Sardar Sarovar. Today’s event exemplifies the vision of railways and the mission of Sardar Patel.

Mentioning that one of the Kevadiya bound trains is originating from Puruchi Thaliaivar Dr. MG Ramachandran Central Railway Station, the Prime Minister paid tribute to Bharat Ratan MGR on his Birth Anniversary. Shri Modi praised his accomplishments on the film screen and political platform. He noted that MGR’s political journey was dedicated to the poor and he worked tirelessly for a dignified life of the down-trodden. The Prime Minister said that we are working to fulfill his ideals and recalled how the grateful nation renamed Chennai Central Railway station after MGR.

The Prime Minister pointed out the new connectivity between Kevadiya and Chennai, Varanasi, Rewa, Dadar, and Delhi along with MEMU service between Kevadiya and Pratapnagar and broad gauging of Dabhoi-Chandod and new Line between Chandod- Kevadiya will script a new chapter in the development of Kevadiya. This will benefit both the tourists and local Adivasis as this will bring new avenues of self-employment and employment. The railway line will provide a connection to the places of faith like  Karnali, Poicha, and Garudeshwar on Narmada.

Continuing with the development journey of Kevadiya,  The Prime Minister asserted that Kevadiya is no longer just a small block in some remote area, it has come up as one of the biggest tourist destinations in the world. The Prime minister informed that the Statue of Unity is attracting more tourists than even Statue of Liberty. More than 50 lakh visitors have come to see the Statue of Unity after it was dedicated to the nation and it is catching on after staying closed during the Corona months. It is estimated, as the connectivity improves, about one lakh visitors per day are expected in Kevadiya. Kevadiya as a good example of planned development of economy and ecology while protecting environment, said the Prime Minister.