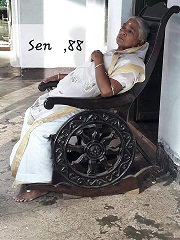 Veteran stage actress Saudamini Pati died at the age of 74

in Entertainment, Odia Cinema January 16, 2021 Comments Off on Veteran stage actress Saudamini Pati died at the age of 74 1,154 Views

Bhubaneswar:16/1/21; Veteran stage actress Saudamini Pati passed away today afternoon at her VSS Nagar at the age of 74, Bhubaneswar residence.  Saudamini Pati, a congenial star made her stage presence merely at the age of eight years. Playing the role of kid wife of Kavi Jayadev, she instantaneously caught the imagination of the cultural people of Rambha, and claimed the best performer award in her first-ever performance. The untimely demise of Shri Banchanidhi Pati, her encouraging father left the family to fend for itself.

The professional actress was born- out of talent and necessity. Her incessant acting ability brought money and most importantly fame that paved a path to a career in acting. In the beginning, she was known to people in south Odissa and towns of Aska, Ganjam, and Bhanjanagar but was not destined to cease there. She spread her ambit by joining Janata Rangamanch which brought her closer to the Stage of Cuttack and Odiya film Industry. Jautuka, Nasta Urbasi, Jhanja, Asoka Stambha, Jawan, Emiti bi hue, Ka age kahibi, Surjya Parag are few acclaimed among those 100 roles that she played on stage as a vamp or heroine. She was highly acclaimed both by the press and public for her golden stint from 1963 to 1970.

In the year 1970, she joined the government of India as a Staff artist in the Song and Drama Division of the Department. She played credibly in many roles in Government-sponsored programmes until her retirement in the year 2009. She was active in Radio Dramas of AIR Cuttack.

She had bagged several credible roles in Odiya films like Amar Prem, Mahasati Savitri, Nijhum Ratira Sathi, and even a Hindi movie “Sodh” winning President’s Gold Medal. Ms. Pati acted in many TV serials that were telecasted on DD Oriya and a few of them like Kantha Kahe Kahani & Bahaghara were highly appreciated.

During her 58 years of career, she has received many awards and accolades at the state and national levels. She is awarded by Manana Natya Sansthan in 2005 and Panchama Veda Purashkar in 2007. She has been appreciated & awarded with “Satabdi Ra Kalakar” in 2009 and 2014.

She was also awarded with the highest award of Odisha Sangeet Natak Academy for her contribution & her role as an actress in Odiya theater & film industry from the State Government.

Monoj Pattnayak of Manana Natya Sansthan , Dhira Mallick of  “Satabdi Ra Kalakar”  mourns for her death besides several organasation and individual  has mourned for the death of an  actress.