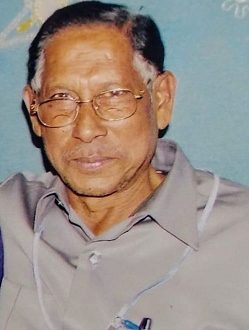 in Odia Cinema, State News January 16, 2021 Comments Off on Senior Film journalist and the editor in chief of BANICHITRA magazine Parikshita Jena passed away 574 Views

Bhubaneswar16/1/21:Report by ONS Bureau)  Eminent film critic, the editor of Odia film magazine BANICHITRA Parikshita Jena, died in Bhubaneswar on Saturday morning(16th, January 2021). He was 80-year-old and was suffering from old age-related problems. His funeral will take place at SWwargadwar as per the family sources.

Parikshita Jena Jena was born on 1942, April 17 at Mahura village in Bhadrak district. His father late Raghunath Jena was a social worker. inspired by his father during his student career  Parikshita Jena, was essayed a role in drama which was staged in his village, during that time he was conferred with an award for his outstanding performance in Bhanjakishore Patnaik,s written drama KULA BOUHU. He had also essayed a small role in Odia film Kiea kahar, Bandhan, Stree, and Baji. as a writer and critics his review and story had been published regularly in different newspapers and periodicals. Among them, ASNTARA DHUMKETU  was a remarkable novel by Jena. Till his death he was working as an editor in chief of BANICHITRA magazine, Parikshita Jena had to work as a senior private secretary in the home department of the government of Odisha and retired from his job in 2001 October. Mr. Jena was associated with several cultural organizations of the state, In every year Banichitra award function for film personality was held with grand and glamour, he was also served as a jury for the Odisha state film award two times. besides Parikshita Jena also serve as a jury for Taranga cine award. Ama Odia Chal Chitra Itihash penned by  Jena was released on 1 May 2016. which book contains details history of Odia cinema, Parikshita Jena also conferred with several awards for his outstanding contribution to film journalism.

2021-01-16
Editor in chief
Previous: Eight students from Odisha have been selected for Phase 2 of Responsible Artificial Intelligence
Next: Odisha Chief Minister Naveen Patnaik has been adjudged as the best CM in the country