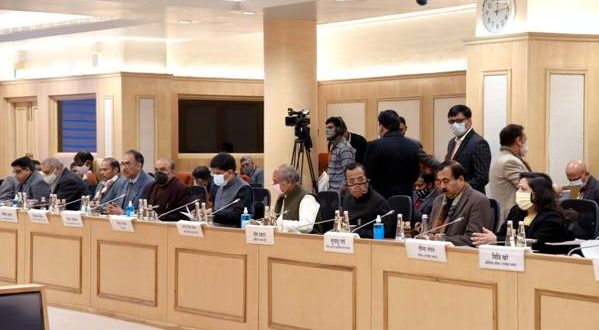 in National January 15, 2021 Comments Off on 9th round of talks between Government and Farmers Unions held inVigyan Bhawan 196 Views

Newdelhi:15/1/21:Union Minister for Agriculture Shri Narendra Singh Tomar, Union Minister for Railways, Commerce and Industry and Consumer Affairs, Food and Public Distribution Shri Piyush Goyal, and Union Minister of State for Commerce and Industry Shri Som Prakash participated in the 9th round of talks with the representatives of 41 Farmers’ Unions at Vigyan Bhawan, New Delhi today. At the outset, Shri Tomar greeted the Farmers’ Unions on the occasion of Makar Sankranti and thanked them for keeping the agitation peaceful.

The Agriculture Minister suggested that discussions with Farmers Unions can also take place in an informal group so that a way forward can be found. He said that in a democracy the government honours the Supreme Court’s directions. Shri Tomar once again reiterated that point-wise discussion can take place on contentious issues. Each state in the country has different circumstances and a lot of farmers across the country support these new farm laws. He also said that procurement of farmers produces at Minimum Support Price (MSP) has increased during this season and procurement centres have also increased.

Union Minister for Consumer Affairs, Food and Public Distribution Shri Piyush Goyal explained the provisions of the Essential Commodities Amendment Act, 2020 during the discussion. He also elaborated on how this Act will benefit the Agriculture sector and farmers. It was mutually decided that the next round of talks will be held on 19th January 2021 as dialogue is the only way forward.

2021-01-15
Editor in chief
Previous: Odisha Government has decided for no public participation in Republic Day celebration
Next: India and Japan Sign MoU to Enhance Cooperation in the Field of ICT