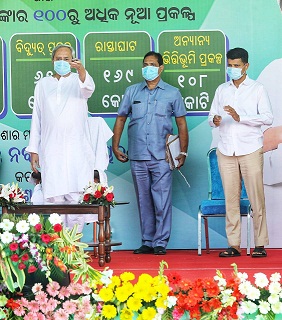 Bhawanipatna:14/1/21: Kalahandi district is no longer the “land of hunger” and has been transformed into the Odisha”s rice bowl, said Chief Minister Naveen Patnaik on Thursday while launching projects worth over Rs 2,000 crore in the district.

The Upper Indravati Lift Canal System, built at a cost of Rs 986.71 crore, is among the projects that he inaugurated. The system, comprising 43.26 km of concrete canals and 1,142 km of underground pipelines, has the capacity to irrigate 25,275 hectares of cropland.

“Biju Babu was injured in a stone-pelting incident in Kalahandi during his visit as the chief minister in the 90s. When I inquired about bleeding from his nose, he said there was nothing to be worried about.

“He had said that the people of Kalahandi love him and he reciprocates it and will work hard for the development of the district,” the chief minister said. 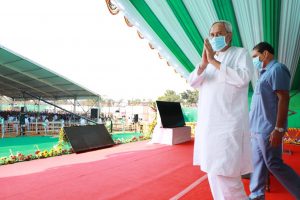 From being the “land of hunger”, Kalahandi has now been transformed into the state”s rice bowl. The district now holds the second position in the state in rice production. This has been possible only due to the hard work and commitment of the farmers, Patnaik said.

Noting that the attempts of “some people” to keep Kalahandi poverty-stricken have failed, Patnaik said that farmers in the district have received Rs 1,200 crore during the paddy procurement season last year and the irrigation potential has increased three-fold while the fish production has also gone up significantly.

Observing that Kalahandi has emerged as the best- performing district in the country in health care, he said that infant and maternal mortality rates, which were 76 and 432 in the year 2000, have drastically improved due to strategic intervention of the state government.

Pointing out that the Indravati River has a major role to play in Kalahandi”s transformation, he announced that a museum and a park, with a temple dedicated to Goddess Indravati, will be built on the banks of the river.

Kalahandi Lok Sabha MP and senior BJP leader Basanta Panda also addressed the meeting which was attended by the local MLAs, ministers and MPs of the western region of the state. Attendees were allowed to enter the meeting premises only after the verification of their COVID status.

However, the Leader of Opposition P K Naik, who is also the Bhawanipatna MLA, boycotted the chief minister”s meeting, protesting lavish expenditure at the government programme.

2021-01-14
Editor in chief
Previous: Mortal remains of noted social activist Padma D Prakash Rao was cremated at Kaliaboda crematorium
Next: High-Speed Internet Connectivity To All Blocks, GPs In Odisha project by end of May this year