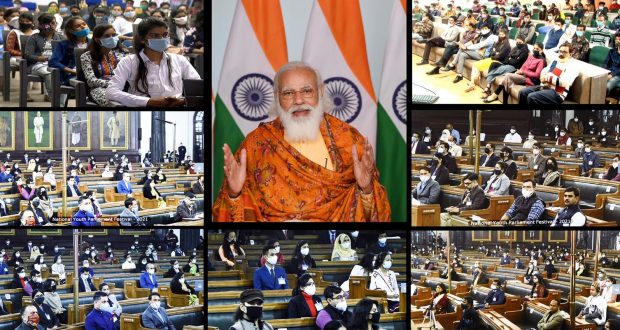 Political Dynasty is the Major Cause of Social Corruption: PM

in National January 12, 2021 Comments Off on Political Dynasty is the Major Cause of Social Corruption: PM 218 Views

Remembering Swami Vivekananda on his birth anniversary, the Prime Minister remarked that even with the passage of time, the impact and influence of Swami Vivekananda remains intact in our national life. His views on nationalism and nation-building and his teaching regarding serving the people and serving the world continue to inspire us. The Prime Minister talked about Swami Ji’s contribution to the individual and to Institutions. Individuals came in contact of Swami Vivekananda and created institutions and they, in turn, created new institution-builders. This started a virtuous cycle of individual development to institution-building and vice versa. This is a huge strength of India as the Prime Minister outlines the links between individual entrepreneurship and great companies. He also asked the youth to take advantage of the flexibility and innovative learning format provided by the recent National Education Policy. We are trying to create an ecosystem in the country, absence of which, often compels the youth to look towards foreign shores, the Prime Minister said.

The Prime Minister stressed that it was Swami Vivekananda who recognized confident, clear-hearted, fearless, and courageous youth as the foundation of the nation. Shri Modi presented the mantras of Swami Vivekananda for youth. For Physical fitness it is ‘Muscles of Iron and Nerves of Steel’; for personality development, it is ‘Believe in Yourself’; for leadership and teamwork Swamiji said ‘’Belief in All’.

The Prime Minister, exhorted the youth to contribute selflessly and constructively in politics and said that today, honest people are getting the opportunity to serve, changing the old notion of politics as a site of unscrupulous activities. Today Honesty and performance have become the need of the hour. In this context, the Prime Minister dwelled at length on the politics of dynasty. He said corruption has become a burden on the people whose legacy was corruption. He called upon the youth to root out dynastic system. Dynasty politics gives rise to incapability and dictatorship in a democratic setup as such people work towards saving the politics of family and family in politics. “Today, days of winning an election by the crutches of a surname are over still this malaise of dynastic politics is far from over…Political dynasty promotes self and family instead of pushing nation first. This is a major cause of social corruption in India”, the Prime Minister said.

Giving an example of the reconstruction work in the aftermath of Bhuj earthquake, the Prime Minister told the youth that the society that learns to make its own path in calamity writes its own destiny. Therefore, all of 130 crore Indians are writing their own destiny today. The Prime Minister said that each and every, effort, innovation, honest pledge by today’s youth is laying a strong foundation for our future.

2021-01-12
Editor in chief
Previous: Indonesian Embassy Lounge Named After Biju Patnaik
Next: “It took almost 50 years and Sh. Atal Bihari Vajpayee for the 2nd AIIMS to be born even as a concept”