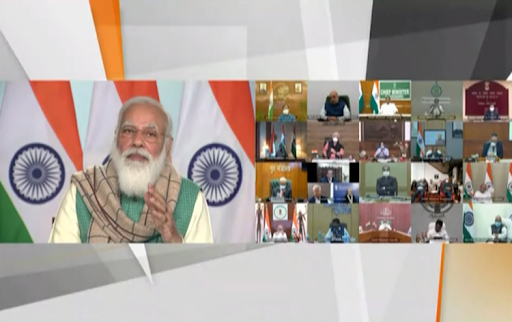 in National January 11, 2021 Comments Off on State governments will not have to bear any cost towards vaccinating 3 crore Health Workers and Front Line Workers 313 Views

Newdelhi:11/1/21:Prime Minister Shri Narendra Modi chaired a high-level meeting with Chief Ministers and Administrators of all States and Union Territories to review the status and preparedness for COVID-19 vaccination on 11th January 2021, via video conferencing.

Coordinated battle against the virus

Prime Minister paid obeisance to former Prime Minister Shri Lal Bahadur Shastri on his death anniversary. He lauded the constant coordination and communication between the Centre and the States, and timely decision making, which has played a big role in the fight against the virus. As a result, the spread of the virus has been contained vis-a-vis several other countries. Prime Minister noted that the fear and apprehensions that citizens had at the start of the pandemic have now ebbed, and the growing confidence has reflected positively on the economic activities also. He also appreciated the State governments for working zealously in this battle.

Prime Minister said that the country is in a decisive phase of this fight, with the start of the world’s biggest vaccination campaign from 16th January. He underlined that it’s a matter of pride that both the vaccines for which Emergency Use Authorization has been given are made in India. He highlighted that both the approved vaccines are highly cost-effective in comparison to other vaccines from across the world, adding that India would have faced great difficulty if it would have had to depend on foreign vaccines.

Prime Minister noted that India’s vast experience with vaccination will prove handy in this endeavour. He said that the priority of vaccination has been decided as per the advice of the experts and scientific community after consultation with the States. Health workers, from both government and private sector, will be the first ones to receive the vaccine. Along with them, Safai Karmacharis, other Front Line Workers, police and paramilitary, Home Guards, Disaster Management Volunteers and other jawans in Civil Defence, and Revenue Officials associated with containment and surveillance, will also receive the vaccine in the first stage. The total number of such personnel is around 3 crore. Prime Minister announced that State governments will not have to bear any cost towards vaccinating these 3 crore people in the first stage. Centre will bear this cost, he added.

In the second stage, those above 50 years of age, and those below 50 years of age with comorbidities or with a high risk of infection, will be vaccinated. Preparation for infrastructure and logistics has been done with all States and UTs, the Prime Minister said, adding that dry runs for vaccination have also been done across the country. He said that our new preparations and SOPs for COVID have to be linked up with our old experiences of running universal immunization programmes and conducting elections throughout the country. He noted that the booth level strategy used for elections needs to be used here as well.

Prime Minister remarked that the most important factor in this vaccination drive is the identification and monitoring of those who need to be vaccinated. For this, Co-Win digital platform has been created. With the help of Aadhaar, beneficiaries will be identified as well as timely second dosage will be ensured. Prime Minister underlined the significance of ensuring that real-time data related to vaccination gets uploaded on Co-Win.

Target of 30 crore in next few months

Prime Minister further said that proper mechanisms have been put in place in case a person feels discomfort due to the vaccine, adding that such a mechanism is already in place for universal immunization programme, and it has been further strengthened for this vaccination drive.

Prime Minister underlined the significance of following the COVID related protocols throughout this endeavour, adding that even those who are receiving the vaccine should continue to follow these precautions to prevent any spread of the virus. He said that all States and UTs will have to put in place mechanisms to keep rumours related to vaccination in check. For this, help from religious and social organizations, NYK, NSS, SHGs etc should be taken.

Prime Minister also discussed the spread of Bird Flu in nine States including Kerala, Rajasthan, Himachal Pradesh, Gujarat, Haryana, Uttar Pradesh, Madhya Pradesh, Delhi and Maharashtra. He said that the Ministry of Fisheries, Animal Husbandry and Dairying has put in place a plan to tackle the problem, in which District Magistrates will have a key role. He asked Chief Ministers of the affected States to guide their DMs in this endeavour. He added that other States where Bird Flu is yet to reach should be on a constant vigil. He expressed hope that through proper coordination between Forest, Health and Animal Husbandry Departments, we will be able to overcome this challenge soon.

Union Home Minister said that the country has performed better than most of the other countries in facing COVID under the leadership of the Prime Minister and the Chief Ministers. He added that the coordination displayed by the States in this endeavour till now should also continue in the vaccination drive as well.

The Chief Ministers expressed happiness at the rollout of vaccination. They discussed some issues and concerns about vaccines, which were clarified in the meeting.

2021-01-11
Editor in chief
Previous: Odisha government clarified that no cases of bird flu have been detected so far
Next: Dr. Harsh Vardhan presides over the 47th Convocation Ceremony at AIIMS, New Delhi