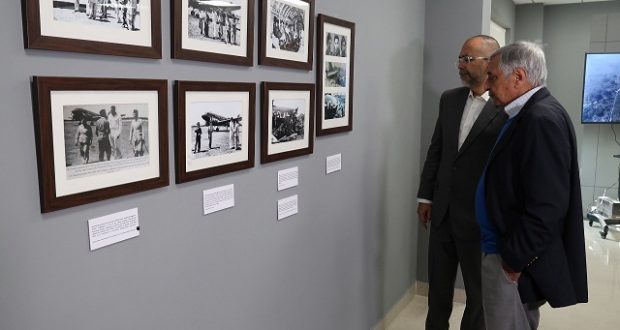 New Delhi: 11/1/21:The heroics of late Biju Patnaik in the Indonesian Freedom Movement earned him another honour as the Indonesian Embassy in New Delhi dedicated a room in his name. It features many pictures and memorabilia of the great fighter pilot and patriot Biju Patnaik, including the ones from the Indonesian Air Force who sacrificed their lives in the movement.

However, the most interesting artefact in that room was a framed picture of Bali Yatra depicting ancient ‘Sadhaba Puas’ setting off for Java and Sumatra islands in Indonesia. The picture is captioned as Kalinga-Bali Yatra, Tryst With History On high Seas.

Addressing the guests, Sidharto Reza Suryodipuro, Ambassador, of the Republic of Indonesia in Delhi said, “India, especially Odisha’s contributions to Indonesia’s independence was immense. Independence is a sacred thing for us, it is very important for our citizens. So as a nation, we remain grateful to those who contributed to realising this dream of ours.”

Dedicating the room in the embassy, he said, “This is the least we can do to honour the braveheart who made significant contributions to our cause. And I hope, it will do justice to his memory.”

A visibly glad Prem Patnaik said, “My father always treated Indonesia as his second home. The proudest moment for my father was when he was honoured with the title ‘Bhumi Putra’ by the Indonesian Government.”

In July 1947, Biju Patnaik lent a Douglas C-478-20-Dakota to Indonesian Government which later served many purposes among transporting Indonesian leaders during their struggle in their National Revolution.

Prem Patnaik also contributed a picture to the embassy that featured President Sukarno sitting in the airplane with his signature Peci Hat.

2021-01-11
Editor in chief
Previous: Flight services from Jharsuguda district to Mumbai and Bengaluru will commence from tomorrow
Next: Political Dynasty is the Major Cause of Social Corruption: PM