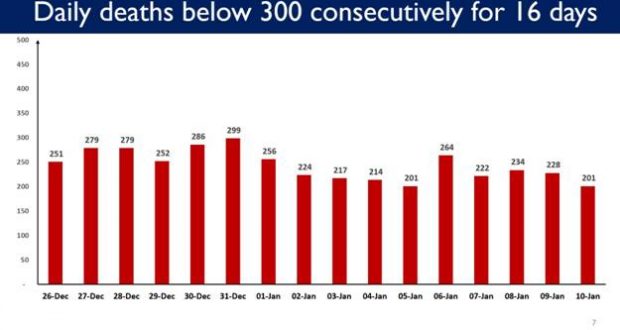 Sustained Decline in number of Daily Fatalities; daily deaths below 300 since the last 16 days

in National January 10, 2021 Comments Off on Sustained Decline in number of Daily Fatalities; daily deaths below 300 since the last 16 days 249 Views

Newdelhi:10/1/21:The focused efforts of Centre and State/UT governments on effective clinical management of the hospitalized cases have ensured a sustained decline in India’s Fatality Rate which is 1.44% today. With effective containment strategy, aggressive testing and standardized clinical management protocols based on holistic Standard of Care Protocol across government and private hospitals, the number of new deaths have dipped.

As part of the COVID management and response policy, there has been a sharp focus of the Central Government on not only containing the COVID, but to reduce deaths and to save lives by providing quality clinical care to the critical and severe patients of COVID. Collaborative efforts of the Union and State/UT governments have resulted in the strengthening of the health facilities across the country. India’s present active caseload of 2,23,335 consists of just 2.14% of India’s Total Positive Cases. A recovery of 19,299 cases in the last 24 hours has ensured a decline of 855 cases from the Total Active Caseload.

The figure shows the change in the Active Cases in the last 24 hours. Maharashtra recorded maximum positive change with an addition of 1,123 cases whereas Rajasthan shows maximum negative change with a drop of 672 cases. 79.12% of the new recovered cases is contributed by ten States/UTs. Ten States/UTs have contributed 82.25% of the new cases. 73.63% of the 201 case fatalities that have been reported in the past 24 hours are from Seven States/UTs. A total of 90 samples have been found to be positive with the new U.K variant genome.