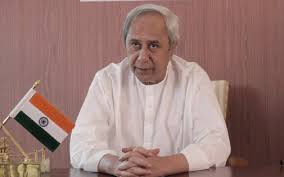 in State News January 10, 2021 Comments Off on Odisha Chief Minister Naveen Patnaik’s assets increased by only Rs 2.81 lakh in a year 234 Views

The Chief Minister had taken a loan of Rs15 lakh from his sister Gita Mehta which he is yet to return, the property statement made public along with other Cabinet Ministers stated. Naveen owns an Ambassador car of 1980 model worth Rs 8,905.

Naveen’s immovable property includes 22.7 acres of farm land and a building in Tikrikhera village in the Faridabad district of Haryana, two-third share in Naveen Nivas, 50 percent share in the property situated at 3, APJ Abdul Kalam Road in New Delhi. The Chief Minister has a total deposit of Rs 27.38 lakh in different banks in Odisha and New Delhi. Besides, he owns jewelry worth Rs 2,21,200. 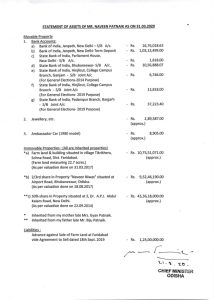 2021-01-10
Editor in chief
Previous: Covid-19 Negative Report Not Mandatory For Darshan At Puri Jagannath Temple
Next: Odisha government clarified that no cases of bird flu have been detected so far