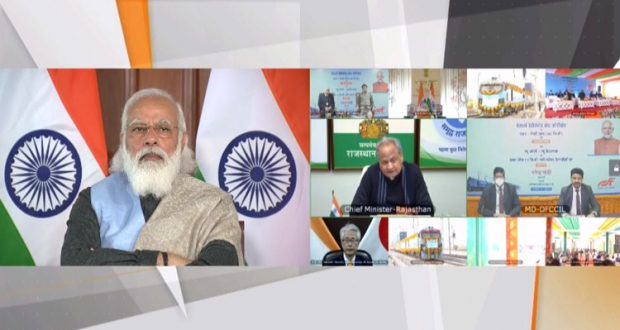 Speaking on the occasion, Mr. Modi said, the dedicated freight corridor is being looked at as a game-changer for India. After a lot of hard work in the last five to six years, it has come to fruition. He said that the opening of this stretch will fuel the industries in Rewari, Mahendergarh, Ajmer, and Seeker.

Mr. Modi said that it has opened the path for manufacturing units to reach the national and international markets at low cost. He said it would also boost the possibility of investment in the area.

The Prime Minister said that the corridor covers 135 stations, which will be developed as multimodel logistic hubs. He said that it will also help the village and small scale industries. Mr. Modi said that the Corridor will contribute in the uplift of the economy.

Mr. Modi also said, a few days ago, India approved two Made In India vaccines for COVID -19 instilling Indians with renewed self-confidence. He added that all these efforts and steps show the country is moving swiftly towards building a self-reliant India.

The New Rewari-New Madar section of the Western Dedicated Freight Corridor is situated in Haryana and Rajasthan. It consists of nine newly built dedicated freight corridor stations which include three junction stations in New Rewari, New Ateli and New Phulera.  The opening of this stretch will benefit various industries in Rewari – Manesar, Narnaul, Phulera, and Kishangarh areas of Rajasthan and Haryana and will also enable better usage of the container depot of CONCOR at Kathuwas. This section will also ensure seamless connectivity with the western ports of Kandla, Pipavav, Mundhra, and Dahej situated in Gujarat.

The Double Stack Long Haul Container Train Operation which adds an enhanced axle load of 25 tonnes will maximize capacity utilization. These wagons on a long-haul double-stack container train on the western freight corridor can carry four times in terms of container units compared to the current traffic on Indian Railways.

AIR correspondent reports, the Dedicated Freight Corridor will help in the timely movement of cargo. It will reduce the pressure of goods trains on the Delhi-Ahmedabad rail track and this may lead to the introduction of more passenger trains in the future. This corridor is very important for Rajasthan, as it will accelerate the development of Jaipur, Ajmer, Sikar, Nagaur, and Alwar districts of the state. Due to the development of new industrial areas in these districts, local industries will get a boost and youth will get employment. Also, it will give a boost to industries like textiles, stone, cement, handicrafts, and handlooms and also give a new direction to rural development in the region.

2021-01-07
Editor in chief
Previous: Fakir Mohan University started a ‘voluntary cleaning drive under the leadership of Vice-chancellor
Next: India calls for introspection within UN Security Council over lack of representation of African countries