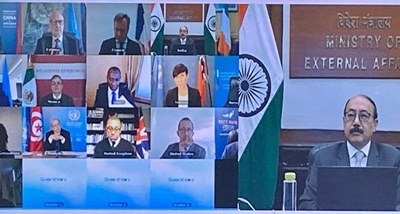 in International January 7, 2021 Comments Off on India calls for introspection within UN Security Council over lack of representation of African countries 264 Views

Newdelhi:7/1/21:India has called for introspection within UN Security Council over the lack of representation of African countries among its permanent members. Foreign Secretary Harsh Vardhan Shringla said, even though more than half of the issues on the agenda of the Security Council are related to Africa, the African continent does not even have a single voice amongst the permanent membership to defend its own interests. He said, the world body needs to correct this historical anomaly, and collectively support the Ezulwini consensus.

Mr. Shringla was speaking at the UNSC during Open Debate on ‘Challenges of Maintaining Peace and Security in Fragile Context’ last night. Welcoming the evolution and rise of Africa as a key factor in the contemporary world, he said African Union has a leadership role to play in consolidating peace and post-conflict reconstruction in Africa.

Mr. Shringla said, collaboration between the UN and the African Union and sub-regional organisations, such as ECOWAS, ECCAS, SDAC, and IGAD, has yielded positive results. He said the UN Security Council should remain respectful of the regional approach adopted by countries, in collaboration with regional organizations to address common challenges.